A native doctor, Ade Bamise, on Friday, appeared before a Tinubu Magistrate’s Court in Lagos, charged with obtaining N170, 000 from one Adekunle Ademola, under false pretences. 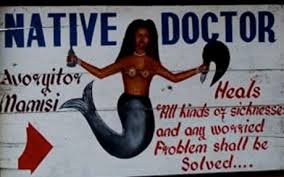 Mr. Bamise, 44, is facing a three-count charge of obtaining under pretext, stealing and conspiracy.

The Prosecutor, Daniel Ighodalo, told the court that the accused committed the offences between November18 and 19 at Lekki Phase 1, Lagos.

“On the said day, the accused accosted the complainant and told him that he (Ademola) needed prayers for his lost glory and destiny to be restored,” Mr. Ighodalo, a police sergeant, said.

“The complainant was taken to an undisclosed destination where he claimed he was hypnotised and told to bring the sum of N100, 000 for spiritual cleansing and herbs.” “The complainant did as the native doctor ordered and went ahead to withdraw the said cash.”

“He repeatedly withdrew another N70,000 the following day, as ordered by Bamise,” Mr. Ighodalo said. Mr. Ademola said that it was after he had remitted the money that he got back to his senses, and quickly alerted the police to help apprehend the culprit.

The prosecutor explained that the offences contravene Sections 409, 314(b) and 285 of the Criminal Law of Lagos State, 2011. Mr. Bamise, however, pleaded not guilty to the charge.

The Magistrate, O.M. Ajayi, granted the accused bail in the sum of N100,000 with two sureties in like sum, who must provide income tax receipts for three years and one of who must be a blood relation of the accused. She adjourned the case till Dec. 17 for mention.