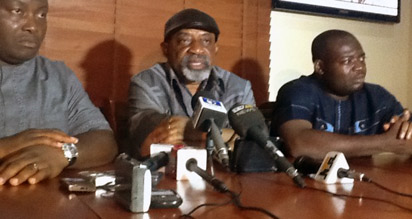 The governorship candidates of the Peoples Democratic Party, Labour Party and the All Progressive Congress have reiterated their stance not to participate in the November 30 supplementary election in Anambra State.

The candidates are Tony Nwoye (PDP), Ifenayi Ubah (LP) and Chirs Ngige of the APC.

Ngige, who spoke on behalf of his co-contestants at a press briefing in Abuja on Saturday, said that they would not like to be used as “guinea pig” to give legitimacy to the controversial election which the Independent National Electoral Commission, INEC, declared as ‘inconclusive’.

Ngige also alleged that the register used for the election was printed in Enugu.

Specifically, he said that the voter register used in the Agulu ward of the Anambra State Governor, Peter Obi, contained under age voters.

Ngige insisted that the voter register given to the parties was different from the one used for the election by INEC.

The APC flag-bearer further accused INEC of using students of Unizik as presiding officers, saying, “We have evidence that Unizik students were used as presiding officers”, contrary to the claim by INEC chairman, Prof. Attahiru Jega, that students were only used as Assistant Registration Officers (ARO) in areas where there was shortfall of National Youth Service Corps (NYSC) members.

Ngige also claimedthat the Resident Electoral Commissioner in Anambra State, Prof Chukwuemeka Onukaogu served as the head of a cabal that rigged the election, adding that the INEC administrative inquiry did not give them a fair hearing.

He said, “The INEC administrative inquiry is of no value and therefore we will not participate in the supplementary election.

“The election has no result sheet. All we are saying is that the electoral officer of Idemili north, Chukwujekwu Okeke did not act alone. He is part of a syndicate that rigged the election.

“We will want to reassure Anambra people that we are here to fight for them. What happened in Anambra State was not proper. If those who rigged the election are allowed to escape, then annulment of my election in 2006 was not proper. They said that my election was tainted, hence it was annulled. I have repented.

“We have rejected the November 30 supplementary election”.

On his part, the LP candidate, Uba said, “I will not be part of the November 30 charade.”

The PDP candidate, Nwoye said he would not take part because according to him, “My participation is to give credibility to the charade called November 30 supplementary election”.