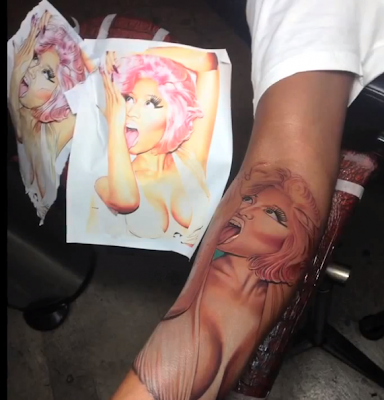 Safaree Samuels aka Scaff Beezy is letting the world know that his love for Nicki Minaj is real, even though Nicki is yet to officially announce him as her boyfriend.

Scaff Beezy and Nicki Minaj have been rumored love birds for a very long time, they’ve known each other before Nicki became famous.

But Nicki swears he is just her hypeman, more like a brother to her.

This week, Safaree showed off his new tattoo which took 6 long hours to make, and features a pink-haired Nicki with her tongue and ‘most sought after’ cleavage hanging out.
On why he got the tatt, SB explained:

Most Hollywood reporters believe this is the confirmation that these two are much more than they’ve been letting on. I think that’s a real hot tattoo!!