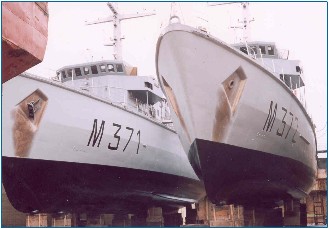 The Nigerian Navy says it is building commercial war ships for export within the African countries.

The Chief of Naval Staff (CNS), Vice Adm. Dele Ezeoba, said this on Tuesday when he inspected the second indigenous patrol ship under construction at the Naval Dockyard, Victoria Island, Lagos.

Ezeoba expressed confident that the Nigerian Navy was skilled enough to build patrol ships between 10 and 38 metres in size for export.

“The Nigerian Navy will no longer buy a ship of between 10 and 12 metres in size, because we have the capacity and capability to build them in our dockyard,’’ he said.

According to him, the ship under construction is in the same class with first indigenous 31 metres patrol ship, NSS Andoni, but was redesigned and upgraded to 38 metres.

Ezeoba said that the ship building business would not only attract economic value but create job for hundreds of thousands of Nigerians in the maritime sector and beyond.

He assured that the second indigenous ship would be delivered to Nigerian Navy by the dockyard for its inauguration into the fleets latest by June 2014.

At the NSS Beecroft, the Naval Chief also inaugurated four new patrol shaldag mante boats to enhance operational capability of the base in addition to the six of their class which were inaugurated in December 2012.

Earlier, while addressing officers and rating at the Naval Training Command, Apapa, Ezeoba announced plan to build a new Navy barrack in Abuja in order to address the accommodation problem in the service.

He said that the Naval Headquarters was looking at the possibility of channelling the lodging allowances of officers and ratings, which amounted to N3.6 billion annually, into building more houses within a year. (NAN)