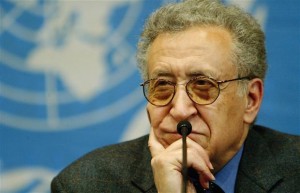 UN-Arab League envoy to Syria, Lakhdar Brahimi, Tuesday said that peace talks between the Syrian government and rebel groups will not go ahead as planned in November. He however said diplomats were “still striving to see if we can have the conference before the end of the year”.

The announcement came after he met senior diplomats in the Swiss city of Geneva in a new push to prepare the already long-delayed peace conference. President Bashar al-Assad’s government signalled it was not ready to negotiate handing over power.

Russia on Tuesday meanwhile insisted that Iran must be invited to the peace negotiations, a position the rebels are totally against.

Brahimi said the discussions on that issue had not been completed.

“All those who affect the situation must be invited to the conference,” Sergey Lavrov, Russia’s foreign minister, said.

“This includes all of Syria’s neighbours, this includes almost all countries of the Persian Gulf including, of course, not only the Arab countries but also Iran. This includes the permanent members of the UN Security Council, and other countries such as Turkey.”

Syria’s opposition has refused to attend peace talks unless Assad’s resignation is put up for discussion, a demand rejected by Syria.

Ahmad Jarba, Syrian opposition leader, has also rejected the rebels’ participation if Iran is asked to attend calling Iran’s invitation a “provocation”, saying the conference must be arranged without any preconditions for participants.

Jarba, who heads the main umbrella opposition, the National Coalition, emphasised the group’s commitment to attending Geneva II only as a united front and reiterated its unequivocal demand for a ceasefire during the talks.

The coalition has said it plans to meet in Istanbul, Turkey, on Saturday to decide whether to attend the peace talks, but the Syrian National Council, a key member of the bloc, has threatened to quit if it does so.