nPDP/APC LATEST: One Of G7 Governors Said He Remains In PDP

After the Baraje-led faction of the Peoples Democratic Party (PDP) has announced it joined the All Progressives Congress (APC), one of the faction’s members, Governor Babangida Aliyu of the Niger State, has said that he remains in the ruling party. 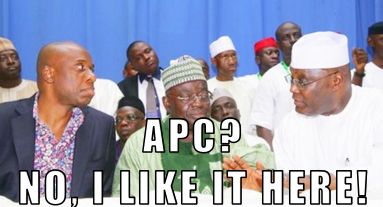 Aliyu made it known through his spokesperson, Danladi Ndayebo, hours after the APC announced a merger with the so-called ‘New PDP’ (nPDP), also referred to as G7 since there have been seven governors in the faction.

Aliyu’s decision, however, has called the ‘G7’ concept into question.

Niger governor was shocked by “the announcement of the merger of New PDP and APC even before a final decision was taken on the matter,” Ndayebo said in a statement.

He added Aliyu was not present at the meeting where the merger deal was sealed. Ndayebo said the Niger governor “insisted that talks were still ongoing with the President and would await the outcome of the negotiation before taking a final decision.”

Baraje, however, had told journalists at the media briefing in Abuja, to announce the merger on Tuesday, that Aliyu left the merger meeting early but agreed with the decision.

With Aliyu’s announcement, the merger has 17 governors (11 APC and 6 New PDP).

It will be recalled that the aggrieved governors of the PDP announced their decision to merge with the APC in the afternoon of November 26, 2013, Tuesday. The meeting commenced at 9.30 a.m. at Kano Governor’s Lodge. It was the continuation of the meeting which ended last midnight, at about 12.30 a.m.