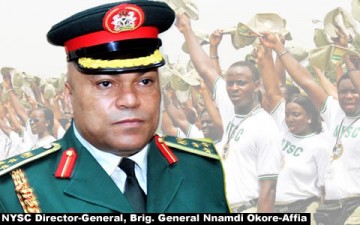 The National Board of the National Youth Service Corps (NYSC) has kicked against requests for the inclusion of a compulsory one year military training for corps members, saying it would pose grave danger to the country if at the end of the training they are not absorbed into any of the military services.

Chairman of the NYSC board, Alhaji Tijani Adekanbi, who made this known at a meeting with the acting governor of Niger State, Alhaji Ahmed Musa Ibeto, at the Government House in Minna, the state capital, said that members of the board of NYSC met recently on the issue and decided to suspend the matter.

“If we give them one year military training we have to absorb them into any of the services. If they are allowed to be on their own it will be dangerous for the country”.

He said the scheme was currently working out a guideline that must be adhered to by all corps members while embarking on their Community Development Service (CDS) to ensure that “over ambitious projects with huge financial demands are not embarked upon.”

He also urged those patronizing the NYSC CDS projects to scrutinize the projects properly and contact the NYSC secretariat before supporting the idea.

On the proliferation of fake NYSC camps and fake NYSC certificates, the chairman called for more vigilance on the part of employers of labour, insisting that it was almost impossible to forge the NYSC discharge certificates.

He therefore asked employers of labour to always crosscheck the validity of the NYSC certificates tendered by their employees.

Stressing the importance of the discharge certificate, Adekanbi said that influential Nigerians, who made their children evade the mandatory one year service, were putting them at risk in the future as they would not be eligible for employment or qualified to contest election without the certificate.

Speaking earlier, Ibeto said the NYSC scheme had assisted the Niger State government in the implementation of its education and health programmes through the provision of qualified manpower.

“The NYSC scheme has been able to make Nigerians know every part of this country, it has made our youths to know the true situation on the ground in the states where they served,” he added.