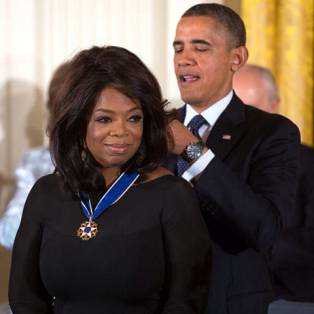 President Obama and arguably leader of the free world, honored female talk show legend and media mogul Oprah Winfrey and 15 others with the Presidential Medal of Freedom, which is America’s highest civilian honor.

The award is given to individuals who have made “meritorious contributions to the security or national interests of the US, to world peace, or to cultural or other significant public or private endeavors.”

President Obama called Oprah “the pinnacle of the entertainment universe,” as he put the medal on her neck.