Twenty-four-year-old fuji/pop rapper, Olamide Adedeji, popularly known as Olamide has no doubt taken over the mantle of leadership as far as rap music is concerned in Nigeria. 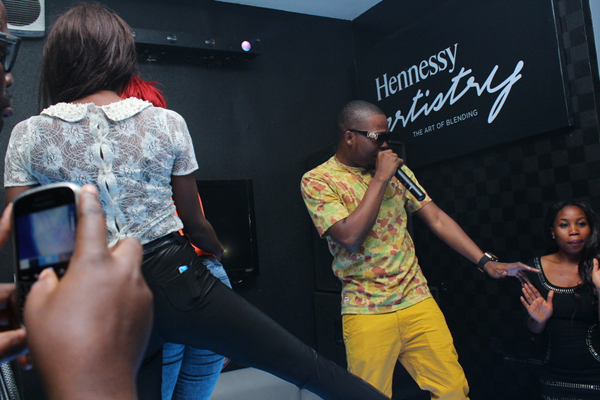 Born on March 15, 1989, Olamide never hesitates to promote his roots, Bariga, Lagos, in his music. In 2010 he hit the limelight when he dropped the lead single from his debut album, Eni Duro, which transformed him into an emerging voice on the Nigerian music scene.

Overnight, the final year student of Mass Communication from Tai Solarin University became the beautiful bride as he was courted by established acts for collabos before breaking away from his mentor, ID Cabasa, and starting his own label, YBNL Nation.

One thing that sets this rapper apart is his ability to code switch while on the mic as he flips between Yoruba and English effortlessly. Olamide has performed live on big stages all over Nigeria and he is most definitely a street favorite with the release of his debut album, Rhapsodi and now, talk about a third studio album, Baddest Guy Ever Liveth is rife following the success of his sophomore effort, YBNL.

In this exclusive interview with TAIWO OLUWADARE, Olamide bares his mind on issues including the late Dagrin.

Could you tell us about yourself?

My name is Olamide Adedeji. I’m a native of Abeokuta, Ogun State. I was born and bred in Bariga, Lagos. I’m a student of Tai Solarin University where I’m studying Mass Communication. I’m from a family of seven.

How did you start out as rapper?

I discovered music was in me while growing up. In 2003 I started writing my own lines and performing at shows and the rest today is history.

Growing up was not that rosy neither was it that bad. Growing up in the ghetto was quite challenging because you’re looked down on by kids from upscale neighbourhoods. In the ghetto I was given ghetto orientation which is never to look down on myself no matter what.

Tell us about your love life?

I have nothing to say about that.

Late Dagrin seemed to have influenced you a great deal. What does he mean to you?

He’s more like the late Martin Luther King. I call him Barrack ‘O Grin. He is such a blessing to Nigeria. He really paved the way big time for up-and coming rappers like myself back in the day. It’s not like there has not been other people before him but his impact was awesome! Dagrin is a great artiste and I respect him; he is a legend.

Lately you have become so big. How are you filling the vacuum Dagrin left behind?

I don’t know. It is depend on people’s perspective. I just live my life the way I feel and besides, I’m not the only rapper in the industry. There are others like Lord of Ajasa. However I’m only doing my thing. Now people are comparing me to Dagrin and that feels great. I see it as a blessing from God. I can’t say I’m the best rapper; that would be ridiculous. It’s like saying Jay Z is the best rapper. However, it’s not like Jay Z is better than B.I.G but people see the love they have for B.I.G in Jay Z. B.I.G died when he started making money and people were heartbroken. And Jay Z can never open his mouth and say ‘I’m better than B.I.G.’ The same thing applies to me too. I can’t say I’m better than Dagrin.

How do you get inspiration for your music?

I discovered a long time ago that rap music is all around me so I draw a lot of inspiration from my environment. I just feel comfortable being a rapper as opposed to singing. Seeing rap icons like Dagrin and the love he had for the art just overwhelms me.

How do you handle your female fans?

(laughter)We dey try. Behind every successful man there is a woman. For me it’s not just about a woman but women so I take advantage of it positively. I don’t sleep with my female fans; I treat them like my sisters.

What’s been your happiest moment?

God has done many things for me. I can’t tell which moment is the happiest but one I can remember was the release of my first album, Rhapsodi. I was so happy when it was released. That album registered my name in the annals of the history of rap music in Nigeria.

I met I.D Cabasa when I went to record with a friend in a studio. We met each other and struck the right chords and the connection took off from there. That’s how I ended up having his support. And ever since, he’s been giving me that special big brotherly love.

What’s your advice for up-and-coming artistes?

My advice is that they should put God first and do less of unnecessary hard work.

If not rap what would you be doing?

For now, I don’t see myself leaving the rap world. I would rather be running a rap music label.

What is the meaning of Ilefo Illuminati

It is slang in my neighbourhood in Bariga, Lagos. Ilefo simply means swag.

There is talk that you belong to illuminati. How true is this?

I have been correcting that impression in all my interviews and I’m not going to get tired of it. I only feel I need to keep representing my own people and communicating with them in a way that they will understand me. So, I want to tell my people that I don’t belong to illuminati or any secret society.

What has been your challenges?

Wow! It used to be an issue of finance. Right now the major one we are facing is the issue of piracy. And it’s crazy men! I feel it should stop but I also know it can never be stopped!

What are your dreams?

I want to be a global brand that is why I’m looking up to God. It is not by my power but by the grace of God. I feel honoured and great that I’m one of the top profile rappers in town.