This is the extraordinary moment a wedding descends into chaos when the new husband’s pregnant mistress storms the reception and attacks the bride. 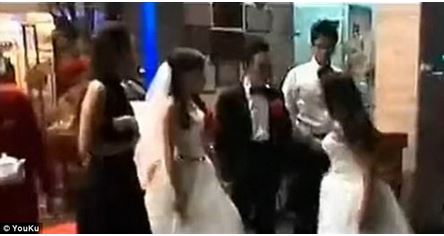 Photos and video below show the scorned woman, who is wearing a wedding dress of her own, screaming at the newlyweds before wrestling the bride to the ground in the Chinese city of Shenzhen.

The groom, visibly shocked, is helped by waiters in tuxedos to separate the two women, but the war of words continues for several minutes.

Amid the screaming, the bride is reportedly heard saying: ‘You didn’t have an abortion while you could and now you come here with your big stomach’.

‘How do I know whose kid it is? Are you trying to coerce us into buying you a house? Can we afford it?’

Her outburst, at the wedding in Shenzhen’s Huaqiangbei area, was transcribed by The Nanfang.

For a full three minutes, the two women are seen grappling and shouting abuse, on several occasions having to be restrained by onlookers, sometimes by as many six or seven.

At one point, the bride even turns on her new husband and pushes him away. Eventually, both women drop to the floor in apparent exhaustion.