Millions of viewers all across France and Europe were on edge as they tuned in to see whether Doria Tillier would present her Canal+ weather forecast NAKED on the evening of November 20, 2013, Wednesday, as she promised. 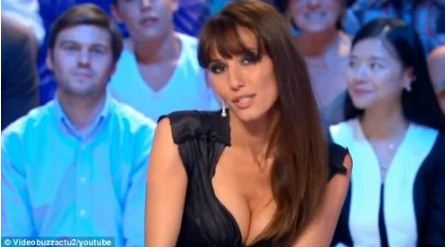 The French model and weathergirl, Doria, vowed to take her clothes off should France pull off a remarkable comeback from 2-0 down against Ukraine in their play-off match on Tuesday.

They did that by winning 3-0 at the Stade de France and qualifying for FIFA World Cup 2014 in Brazil.

Tillier didn’t disappoint, giving a bare, yet professional performance in front of the television cameras.

It may not have been the video you were expecting though, as the former model and actress was filmed in the distance in the tiny hamlet of ‘Poil’, and it is there where her plans became clear.

‘A Poil’, in French, translates as ‘stark naked’, or ‘IN THE NUDE’ in English. You can’t argue with the facts!

After the attention and ratings she and her television show received, we may see some more outrageous forfeits from the French nightly news presenter come on June 2014.