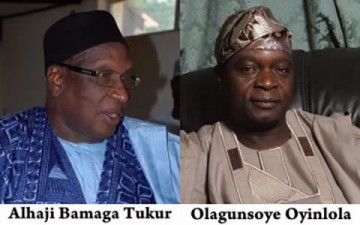 The suspended National Secretary of the Peoples’ Democratic Party, PDP, Prince Olagunsoye Oyinlola, yesterday warned the party’s leadership against making mockery of the judiciary in its desperate attempt to try him and three others for alleged anti-party activities.

The ruling party had summoned Oyinlola alongside the National Chairman of the New PDP, Alhaji Abubakar Kawu Baraje, Dr. Sam Sam Jaja and Ambassador Ibrahim Kazaure, to appear before the Umaru Dikko disciplinary committee next Wednesday, to answer the charges brought against them by the party.

The charges against Oyinlola and the three others are as follows:

•On August 31, 2013, at the Special National Convention of the Party at the Eagle Square, Abuja, the above mentioned persons and others staged a walk-out in a manner contrary to Section 58 (1) (b) (g) and (h) of the Constitution;

•On September 2, 2013, Alhaji Kawu Baraje, Dr. Sam Sam Jaja and Prince Olagunsoye Oyinlola filed suit No. ID/704/2013 against the legitimate party leadership at the High Court of Lagos State without first pursuing the internal remedies of the party, contrary to Section 58(1) (L) of the Constitution;

•Since August 31, 2013, the persons mentioned above have granted interviews and made statements in the print and electronic media not only disparaging the national chairman and other national leaders of the party, but also unduly publicizing disputes/differences within the party, even in the face of the great restraint demonstrated by the national chairman and other national leaders against whom their calumny is targeted. This clearly contravenes Section 58(1)(i) of the Constitution;

•On September 1 and 23, 2013, Prince Olagunsoye Oyinlola wrote two letters to the INEC requesting the commission to recognize the persons above mentioned as the National Working Committee of the party, even in the face of the National Convention held on March 24, 2012, and August 31, 2013. This also clearly contravenes Section 58(1)(b)(h)(i) and (j) of the Constitution of the party; and;

•Since August 31, 2013, the above mentioned persons have consistently maintained that they are of the New PDP (nPDP), thereby promoting factionalization of the party, and in doing so, recruiting to their ranks members of the party in the National Assembly contrary to Section 58(1)(b)(i) and (j) of the Constitution.

But in a November 21, 2013 letter to the PDP National Chairman, Alhaji Bamanga Tukur, counsel to Oyinlola, Mr. Awa Kalu (SAN), said going ahead with the disciplinary process would amount to contempt of superior courts.

Kalu, who also said he was acting on behalf of other officials invited to appear before the disciplinary panel, asked the PDP to tread cautiously.

He said: “Our instruction is that notwithstanding pending litigations, the distinguished party of which you are the National Chairman, intends to put machinery in motion aimed at making mockery of the judicial process and thus the Rule of Law.

“May we respectfully inform you that Suit No: FHC/ABJ/CS/774/13, (Prince Oyinlola and 3 others vs PDP and Another) is currently pending in Court No 6 of the FHC, Abuja Division. In addition, there is a pending appeal at the Supreme Court arising from the Court of Appeal Suit No CA/A/84/2013 (Chief Adebayo Dayo & Another vs Prince Olagunsoye Oyinlola & 2 Others) in which the Court of Appeal dealt with the subject matter of your intended disciplinary proceedings.

“It is on the basis of the above that we urge you to tread slowly in order not to render superior courts toothless.

“I thank you for your statesmanly understanding”.