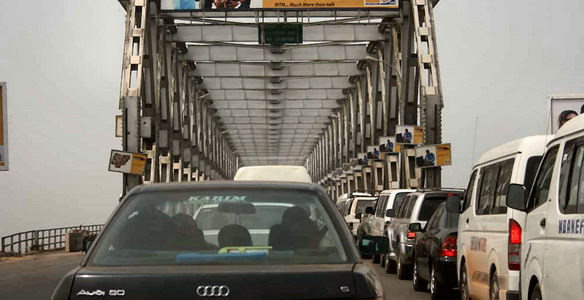 With some few weeks left to celebrate Christmas and the New Year, former Abia State governor, Dr. Orji Uzor Kalu has expressed concern over the plight of travelers, who use the lone Niger Bridge in Onitsha which is usually a nightmare during yuletide.

“I am really emotional about this”, Kalu said, adding that “I feel the pains of millions of Nigerians from the South-East to the North-Central, from Ikot Ekpene to Opobo. Going home in December is worse than spending 48 hours in Kirikiri Maximum Prisons”.

The former governor, who plied that route in 2012, bemoaned the endless promises made by past administrations concerning the construction of a second Niger Bridge, saying it was akin to using the project as part of the ‘dividends’ of the Civil War.

He said, “Yes, we are now talking of the Second Bridge 43 years after the war. In the American State of Maryland, there is a city called Sandy Point with the William Lane Jnr. Memorial Bridge. The first one was built in 1952. When congestion set in, a second Bridge came up in 1973. That is government in action.

“Work on the Niger Bridge began in 1964 by French contractors Dumez. It took five million pounds to complete it in December 1965. The same year as Bendorf Bridge on the Rhine, Germany and the same month as Oosterscheldebrug that links Flushing to Rotterdam in the Netherlands.

“The Second Bridge will not cost as much as Istanbul’s Bosporus, the link between Europe and Asia. It cannot be as long as Europe’s longest, the 19,822 feet Oland Island Bridge in Sweden. I just pray this job gets started in 2014 as promised,” Kalu stated.

The former governor also had a word of advice for the Federal Road Safety Corps (FRSC), saying a deputy corps marshal should be posted to the Asaba end of the Bridge beginning from December 10, to help ease the traffic gridlock faced by travelers.

“I overheard one family talking of travelling by rail through the North to avoid the bedlam. Another is considering the road route through Okene-Lokoja from Lagos. And these are families who live in Ijesha-tedo. The kids cannot understand why there are three long bridges between Lagos Island and the Mainland while their parents do Christmas arithmetic with the Niger Bridge,” Kalu said.