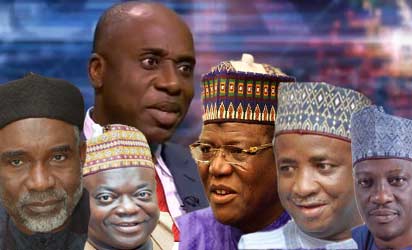 If the resumed media hostilities between President Goodluck Jonathan’s men and the group of seven (G7) rebel governors of the Peoples Democratic Party, PDP, are anything to go by, the peace talks aimed at resolving the governors’ grievances may have just hit the rocks as the Presidency slammed three of them for being ungrateful to the party that sponsored them to their present positions.

Special Adviser to the President on Political Matters, Mr. Ahmed Gulak, in a television programme monitored in Abuja, yesterday, lampooned the governors of Sokoto (Aliyu Wamakko), Niger (Babangida Aliyu) and Adamawa (Murtala Nyako) states for turning against the same party that offered them opportunities to become governors from their unpopular parties.

Gulak, who absolved President Goodluck Jonathan of any blame in the ongoing internal disputes rocking the ruling party, said the rebel governors were not interested in making peace but pursuing personal political interest at the expense of the nation.

The presidential aide noted that some of the governors fighting the President and the Bamanga Tukur-led leadership of PDP were nothing but ungrateful politicians, who owe the party absolute loyalty and eternal gratitude for making them what they are today.

“Look at a governor like that of Sokoto, who was brought into the party as a governorship candidate after PDP candidate had emerged”, Gulak stated, adding that “Wamakko was an ANPP member but was handed the party ticket after our candidate, Muktar Shagari, had already emerged.

“Wamakko does not know how PDP was formed and he should be grateful to the founding fathers of the party and abide by its constitution because no party can excel without discipline.

“The same goes for the Niger State Governor, Babangida Aliyu.”