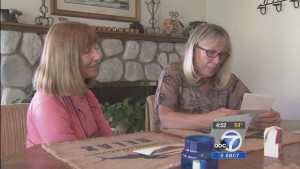 Two women who had began exchanging letters decades ago finally met in person for the first time on Monday. Their friendship has outlasted distance and time.

A lot of people have pen pals. It’s a chance to keep in touch with someone, maybe someone far, far away.

But not everyone writes to someone in South America. And perhaps fewer people have kept in touch nearly 50 years after the first letter. After hundreds of letters, Michele Kilgore and Mirta Vieyra finally met in person.

“One thing I’ve noticed is that my penmanship was much better back then,” said Kilgore.

It hasn’t always been easy to keep in touch.

“I don’t even remember losing her address, but I must have. It says so in the letter, so I must have lost it for a while,” said Kilgore.

But after finding each other on Facebook, they decided to meet.

“If you’re not on an iPhone or an iPad or computer, you don’t communicate,” said Kilgore.

The two women have learned a lot of things about each other over the years through these letters. One letter was written my Kilgore, explaining that she wasn’t a boy, she was a girl.

Asked if she was sad that Kilgore didn’t turn out to be a boy, Vieyra replied, “No, because I wanted a friendship.”

Now, these pen pals will spend the next few days with one another. After 50 years of letters, you might think they know everything about each other.

“No, not everything, but I think we will after this week,” said Kilgore.

Share
Facebook
Twitter
WhatsApp
Previous articleSHOCKING DETAILS REVEALED: Why Peter Okoye’s Family Members Do Not Like His New Wife PLUS You Won’t Believe What They Are Accusing Her Of
Next articleMan’s Crushed Face to be Rebuilt After Bike Crash using 3D Printer
- Advertisement -