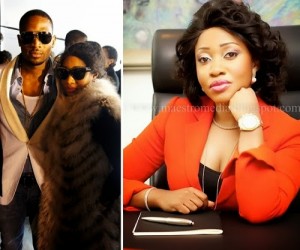 This is according to a new report from Maestromedia

Read the new report below
“Jennifer Obayuwana is the fashionista daughter of the very stylish Mr. John Obayuwana, the MD/CEO of one of Nigeria’s topmost Luxury company, known to all as POLO LTD.
In fact Jenny or J-Wonder, like most who know her prefers to call her, is the very hardworking, globe-trotting Executive Director of the 5-star company.
Since she took up more powerful executive role in her father’s company (which includes CAT Construction), which in a way she practically runs now, it has been an upward swing unprecedented for the brand, with many world renowned watch brands the likes of Rolex, Breguet, Cartier, Hublot, Gaga Milano etc coming on board and having very strategic relationship with Polo Ltd, all of these successes kudos to the gorgeous & hardworking Jennifer.
All the while she was having great successes on the business front, she was also seemingly having fun on the love front then with her then beau D Banj.
Since Dapo Oyebanji aka D banj, aka Banger Lee, the only Eja Nla in Nigeria let it slip sometime ago that he & Jennifer were in a love relationship, loads & loads of media frenzy followed the revelation.
To some then, it was like it was a match made in heaven; With D banj being the most visible Nigerian entertainer in the world and an eligible bachelor at that, whilst Jennifer, is also an eligible bachelorette, one that is being primed to take over her father’s multimillion dollar rated company.
Everyone was thinking it would be like one of those happily ever after love stories we get to read about in all those novels. With many openly exclaiming how wow it was that finally, someone of Jennifer’s pedigree was the one, that had finally won the heart of such a player as D banj.
But alas, after only a few months of the whirlwind romance, which many had thought might have led to one of the weddings of the year, the steam in the love relationship seem to have totally evaporated, the once celebrated love has since waned and in its place just a platonic friendship remains; with both sides just there for each other, to support each other as friends any which way they can.
Jennifer, who only just returned a few weeks ago from a short course at the Columbia Business School, Manhattan, New York, USA where she had gone to brush up on her knowledge of business, preparatory for some bigger challenges ahead, has since moved on to pasture new.

According to some little information we could gather, the very very busy schedule of the duo, coupled with some ‘other factors’ might have been the reason(s) for the break-up. Now unlike sometimes ago in the immediate past, when it was always stress coupled with so much anxiety for Jennifer while the relationship was still hot hot, it has been more of bliss and contentment now for her now, since both have parted ways and moved on. ”