The sleepy town of Ogotun-Ekiti in Ekiti SouthWest Local Government Area of Ekiti State was on Tuesday thrown into confusion when information filtered that a goat had delivered a human-like baby goat.

The News Agency of Nigeria reports that the incident, which occurred in Lori Oke settlement, a village that is about 10 kilometres from Ogotun Town, drew the attention of hundreds of residents and travellers.

The spokesperson of the community, Sunday Ogunmeji, who spoke with a correspondent on behalf of the Baale (community head), Ganiyu Adetoun, said a pastor, Daniel Odedele, helped to deliver the goat of the baby.

“After watching the goat labour for several hours, the pastor took pity on it and courageously pulled the baby out, only for it to turn out to be human-like.

“The ‘baby’ had all the features of a human being such as human face, head, hair, female genitals, two legs and two arms with hoofs.

“However, the human-like baby died at about noon as a result of lack of care as the crowd merely trooped there to watch rather than to attempt to save its life,” Mr. Ogunmeji said.

A resident, Saidi Oladepo, who is a commercial motorcycle (Okada) operator, said that immediately the goat delivered the ‘human-like baby’, it took to its heels.

He said that as soon as members of the community got wind of the incident, they ran helter-skelter in apparent confusion. He said alarm was raised and the local security agents, referred to as `Peace Corps’, were alerted to the incident.

Mr. Oladepo added that it took more than two hours to re-capture the goat in the bush.

The traditional ruler of Ogotun-Ekiti, Samuel Oyebode, could not be reached for comment as he was said to be in a meeting of the Traditional Council.

The Photograph below might be considered GRAPHIC to some readers so PROCEED WITH CAUTION! 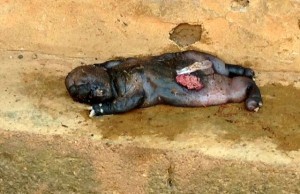