A herb seller has been arrested by the Akwa Ibom State police over the theft of a seven-month old baby boy -Feargod Edemekong. 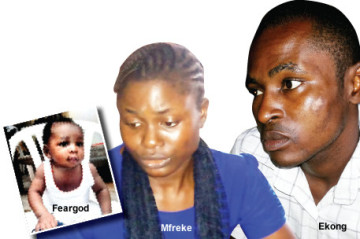 The mother of the baby, Mrs. Mfreke Edemekong, said on Tuesday in Uyo that Aran came to sell some herbal medicines to her husband’s uncle, Mr. Effiong Akpan, a day before her child was stolen.

Mfreke said, “Last Thursday, around 5am, a four-man gang broke into our house. One of them hit my husband, Ekong Edemekong, on the cheek with the butt of his gun.”

She said two of the gang members entered their room, while one stood outside with a gun ready to fire. She added that the last member was the driver.

She said the two members, who went inside the room, snatched Feargod, while pointing guns at her and her husband.

“As the men took my child away, they also forced me to escort them to the car. It was then that I saw that the driver was the herb seller who had called at our house the previous day to sell herbs to Akpan.”

Mfreke, who said her eight years marriage to Ekong had been blessed with two children -Godswill, 7; and the seven-month-old Feargod, explained that the abductors had accused her husband of selling hemp.

She said the four abductors told them that they were police officers who came to arrest them for selling contraband items.

She said, “We did not restrain them from searching our house. We told them that we are farmers; we do not sell hemps or know where such things are sold. Rather than search our house for verification of their claims, they snatched my baby. It was then that we realised that the men are child thieves. They only used hemp issue as a cover story.

“I insisted that they must not take my child away, but the assailants hit me with the butt of their guns and pushed me into the gutter. They zoomed off with my child, whose whereabouts is currently unknown.”

He said another yet-to-be identified suspect had been arrested, while the case had been transferred to the State Criminal Investigation Department for further actions.

“The case has been transferred to SCID for a thorough investigation. The SCID will do its best to ensure that