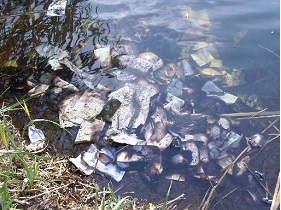 You remember how your parents told you money doesn’t grow on trees? Turns out they were looking in the wrong direction: up, not down.

A man walking his dog in the United Kingdom last month stumbled across an interesting find in the Spalding River: soggy wads of cash floating near a drain.

“Police are intending to consult with the Bank of England for assistance with a formal inspection of the money and a final accurate count,” local police said in a statement.

“It isn’t every day that an amount of money like this is found, and somebody must have information that will help the police trace the lawful owner,” said Steve Hull of the Spalding Criminal Investigations Department.

“I would be grateful to hear from people who have genuine information to pass on to me.” And by “genuine information,” he means something more than “I can identify that money; it’s got a picture of the queen on it.”

You just know that this is the final scene in some epic crime drama that we don’t yet know. Of course, if the man had decided to keep the cash for himself, that could have some significant drawbacks as well.

So, yes, money is problematic, and finding soggy handfuls of it could absolutely wreck your life if you make the wrong decision. Still, it’d be nice to have that option, wouldn’t it?