A well-preserved skeleton of a baby dinosaur was found in Dinosaur Provincial Park in southeastern Alberta, Canada. 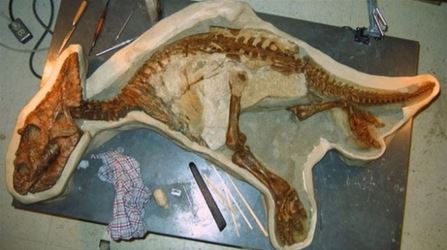 Fossil is smallest intact skeleton ever found of ceratopsids-type dinosaurs

An extremely well-preserved baby dinosaur skeleton has been discovered in Dinosaur Provincial Park in Alberta.

The fossil is extremely rare, as it’s the smallest intact skeleton ever found from a group of horned plant-eating dinosaurs known as ceratopsids — a group that includes the iconic triceratops.

“There’s nothing else like it that I know of,” said Don Brinkman from the Royal Tyrrell Museum.

They determined it was a Chasmosaurus belli, which was common in the area.

Because it had no bite marks or trace of injury, researchers think it wandered into a stream, drowned and was covered in sediment where it lay undisturbed for about 70 million years.

Brinkman said usually small bones get washed away and scattered, but this discovery was preserved because it was buried right at the time of death before any of the soft tissue had rotted away.

“It’s as close as you can get to a dinosaur mummy,” he said.

Philip Currie, a paleobiologist at the University of Alberta, first found what he thought was an exposed portion of turtle shell on a hillside in the UNESCO World Heritage Site.

After digging a bit, he discovered it was the “frill” or decorative bone at the back of the head of the ceratopsids.

The skeleton is almost complete and intact, so much so that even the skin with its tiny rosette pattern left an impression in the rock, says Currie.

However, sometime in the past, a sinkhole opened underneath the fossil and the forelimbs were lost.

The find will help paleontologists determine how these plant-eaters grew and the skeleton will also help identify and place numbers of individual fossilized bones recovered over the years.

Currie says they have already been able to determine from this find that head frills change in chasmosaurs as they mature into adults over a 20-year period.

Because the body and leg proportions don’t change much from juvenile to adult, researchers say adults probably didn’t move fast and the young didn’t have to run to keep up.

By contrast, the juveniles of predatory dinosaurs like T-rex have disproportionately long legs in order to keep up with adults.

Adult chasmosaurs were a medium-sized dinosaur weighing from two to three tonnes and measuring about five metres.

The skeleton is now part of the University of Alberta’s collection and will be part of several research projects in the years to come.

The discovery was made in 2010, but was recently made public.

“In general you want to make sure what you talk about is correct before you send it to the public,” said Brinkman, adding researchers wanted it vetted by the scientific community before presenting it to the world.

Dinosaur Provincial Park is a two-hour drive southeast of Calgary.