An image of Syrians cutting up a lion is being shared widely on social media, with activists pointing to the picture as proof that the nation’s besieged citizens are now so hungry they are having to kill zoo animals to survive. 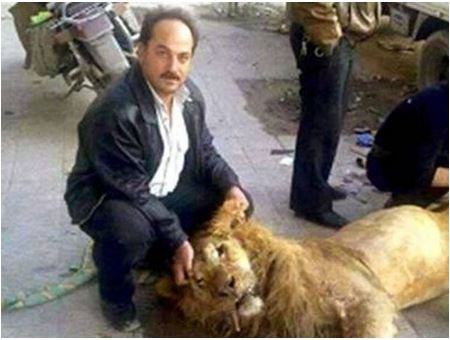 The picture shows three men next to a dead lion, with one man next to the lion, holding up its head.

The image has not been independently verified, but many are reporting they slaughtered the lion from Al-Qarya al-Shama Zoo, in East Ghouta, for food.

It is being circulated as an example of the levels of sheer desperation many have reached in the war-torn capital.

The exact circumstances surrounding the animal’s death are not known.

Some reports claim the men are skinning the dead animal to use its coat for warmth as temperatures drop.

Others have suggested the seemingly emaciated animal was already dead.

As the Arabic word for lion is ‘Assad’, there is also conjecture that this a message to the regime.

The Muslim clerics said people could eat cats, dogs and donkeys in a bid to reduce growing hunger in the agricultural belt of Ghouta.

They called the move a cry for help to the whole world and warned the living would be forced to eat the dead if the situation were to continue deteriorating.

The eastern Ghouta district has been under siege by the Syrian Army for six months and residents have reported food shortages.

The area was among other regions in Damascus affected by a chemical weapons attack in August.

Over 100 people died in the eastern suburbs on Friday after fierce fighting broke out when Syrian rebels tried to break a month long blockade.

According to local and international aid workers, President Assad’s forces appeared to be trying to starve out residents.

This latest bloodshed comes as the Oxford Research Group – a think tank – says that a total of 11,420 children have now been killed in the conflict.