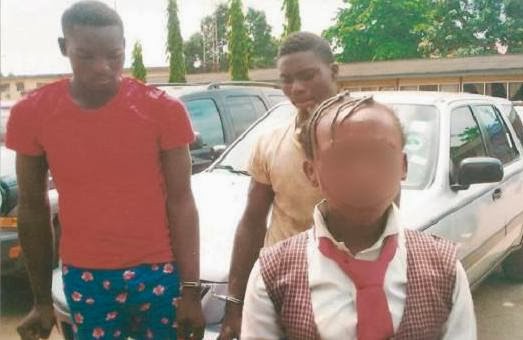 Three men have allegedly gang-raped a 15-year old girl at the Ikorodu area of Lagos, as the police are alleged to be threatening the victim’s parents to settle the matter out of court.

The state government had earlier blamed the police for frustrating rape cases by threatening victims and their families to withdraw their cases. Two of the men have been arraigned at one of the newly established Family Courts in Ikeja for allegedly raping the girl.

The suspects are being tried by the Lagos State Office of the Public Defender, OPD, while the third suspect is still at large. It was learnt that the victim was lured to No 23, Fola Mustapha Street, in Ajegunle area of Ikorodu by her classmate (name withheld), a 16-year old girl, on the pretext that she wanted to return a text book which she had earlier borrowed from the victim.

The victim was deceived by her friend who had already arranged with the three suspected rapists to have sex with her forcefully. The three suspects; Yusuf Mohammed, Rasheed Oyedepo and Tunde were alleged to have inflicted bodily injury on the girl (name withheld).
It was gathered that the raped girl’s friend deliberately delayed her classmate for hours and enabled the heinous crime by putting on the generator set, on the pretext that she needed to charge her phone.
According to the OPD , the victim wanted to take her leave in annoyance when it was getting too late for the her to return home, but her friend told her to wait for a while before taking her to a new room where she was raped in turns by the gang.

While taking turns to rape the girl, the noise from the generator and the music they were playing prevented the people outside from hearing the screaming and wailing of the girl. On getting home in a bad condition, the girl’s mother took her to a private clinic for medical attention.

She was taken to Ikorodu General Hospital for proper medical treatment, where it was discovered that her womb had been tampered with at the private clinic.

The victim was in a critical condition as she was admitted in the hospital for three days while undergoing blood transfusion. A new twist has, however, been added to the story as the police has transferred the suspects, whose cases are already in court, to the State Criminal Investigation Department, SCID, Panti for investigation, an act the OPD described as unlawful.

It was gathered that the police had gone to the girl’s family threatening the mother for taking the case to OPD, after which they transferred the suspects to SCID, Panti. It would be recalled that the government has established a clinic where DNA tests will be conducted on rape victims and suspected rapists to enhance prosecution of the cases.