A river with healing powers mysteriously appeared in Nachi, a community in Udi Local Government Area of Enugu State. 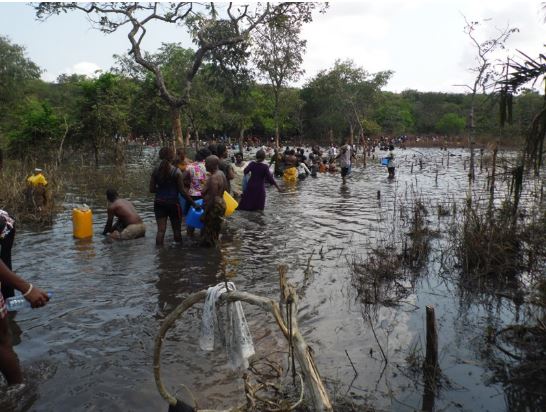 Already named ‘Orimiri Jordan’ (River Jordan) it has become a Pilgrimage Centre, playing host to people from all parts of Nigeria.

Countless testimonies abound as Nigerians struggle to dip themselves into the River.

According to reports, it all started on the 11th day of November 2013 when a Fulani herdsman ran to the community and announced how water covered the place just few minutes after he passed.

“He told us that he passed that place with his herd of cattle and soon after, heard a strange noise; when he turned back, he discovered that a big stream has appeared at the same place he just passed with his cattle. At that point, he ran to Garki and informed his relatives, who also came there and discovered that the water had healing power. From that point, the news spread to the community”, a source disclosed.

Speaking on the origin of the river, the traditional ruler of Nachi community, His Royal Highness, Igwe F.O Onuigbo, Obi II of Nachi, said that at his palace that the mystery River was older than him.

He said “I used to pass through that area to attend school at Inyi-Achi in Oji River, in the early 40s. In those days, there is no water there, the only thing you see there is white sand. But once you get there and you are thirsty, all you need to do is to scratch the surface of the land and ask if for water, water will full your hand immediately if you are an upright person, but if you are evil, no water will come out. That has been the situation”.

Another octogenarian, Chief Festus Ude said “later, we noticed that after some years, the water will form a stream there and would disappear in few weeks. If such happens, we will be fetching water there. However, women who are menstruating and evil people don’t go there. We never heard about healing power of the River until this recent appearance of the River.

“The last time it appeared was in 1992, and at that time, it just formed a small stream, which later disappeared. It has never been as large as this. This is all I know, we have never known about its healing power, this is the first time we are hearing about healing, I don’t whether it is true, we equally heard it like you”.

Right at the junction leading to the location of the “Jordan River”, the visitor is presented with a scene of a busy motor park, where hawkers, food vendors, transporters and okada riders battle for customers.

On the other side of the road, cans of various sizes are displayed for those who came empty handed. From that point, you park your vehicle, mount on Okada and the journey begins.

According to motorcyclist, “I have a vulcanizing shop at the Nachi Market, but when this new business came, I had to close the shop temporarily so that I can also make money here. I hardly make N1000 a day there in my shop, but since I joined this Okada transport to the Enugu Jordan River, I make no less than N10, 000 every day. One of my friends called my attention to it, and I will forever be grateful to him”.

The okada operators charge their passengers fares ranging from N500 to N1000 depending on their bargaining power.

On getting to the River, another business scene welcomes you. Here, apart from those hawking snacks, photographers are not left out. This presents the place as not just a miracle centre, but a tourist centre. While some of the visitors dip themselves or swim in the River, the photographers take shots, get the pictures ready immediately at the cost of N200 depending on the number of exposures.

“You can see that some people come for fun, not just in search of miracle but to see the mysterious River. So when such people come, they request for shots and it has really provided us with good business here.

Sources disclosed that many visitors had testified to all forms of miracles after visiting the place.

People of all ages, with all forms of ailments are being assisted by their relatives and friends to dip themselves into the River.

A can seller at the entrance said “my house help was suffering from enlarged scrotum; we were trying to raise money to go to University of Nigeria Teaching Hospital before a friend told me about this place. We brought the boy here and by the time we went home, he was fully healed, that was how I started selling empty cans here”.

Another visitor, a civil servant, who identified himself as James told our correspondent that he came after neighbours told him about the healing power of the water.

Meanwhile, the crowd of anxious Nigerians seeking for miraculous solutions to their problems has continued to surge into the River.

Even security agents are not left behind as some of them were seen either with their water cans or aiding their loved ones into the River.

However, the water is expected to also dry up any time in the same mysterious way as it came.