In a moving image that conveys compassion and humanity, Pope Francis was pictured yesterday tenderly comforting a man suffering from a rare disease that has caused him to develop neuronal tumors all over his body. 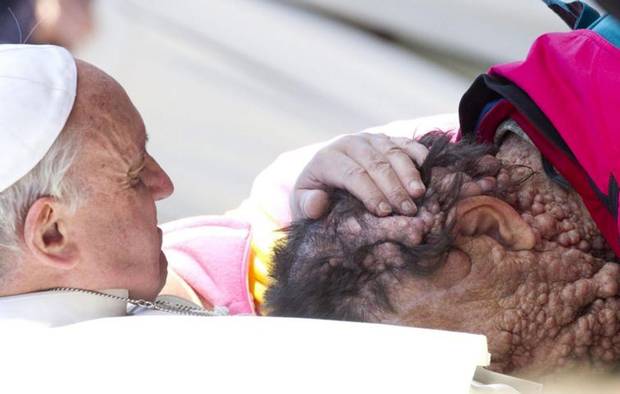 Following his general audience in St. Peter’s Square, Pope Francis kissed and blessed the man, whose face was covered in tumours, as he closed his eyes in prayer.

According to the Catholic News Agency the man was suffering from neurofibromatosis, a illness that can lead to impaired vision, learning impairment and can be extremely painful.

The disease is genetic and is not contagious.

During his earlier address at the Vatican the Pope had asked people to pray for a sick girl that he had just met.

Pope Francis has made humility the cornerstone of his Papacy so far and has a stated aim of making the church more inclusive.

One of his first acts as Pope was to visit prisoners at a youth detention centre near Rome. As part of a Maundy Thursday service he washed the prisoners’ feet.

The image of Pope Francis embracing the man drew comparisons with the story of St. Francis of Assisi comforting a leper.