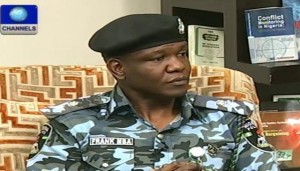 Nigeria Police Public Relations Officer, Frank Mba has again stated that the typical roadblocks known in Nigeria are indeed dead and buried with the Police having no intention to ever bring them back again.

He however added that Nigerians must agree that there is need for the Police to maintain some degree of presence on the roads at all times, which is what has led to the introduction of motorized patrols complemented by foot patrols in areas where there aren’t enough vehicles.

Speaking on the topic, ‘Policing The Police’ on Channels Television’s breakfast show Sunrise Daily, Assistant Superintendent of Police, Mba emphasized that roadblocks have been removed for professional reasons as The Police have discovered that they don’t serve the security needs of the people.

“The essential elements of unpredictability and surprise, which are key components for actually halting criminal activities, are lost when you apply the typical roadblocks, because the criminal elements can actually predict where the road blocks are, they can estimate their firepower because they know exactly how many people are manning the roadblock,” he said.

Mba added that there is an ongoing push for a policy called the “High Visibility Policing” because the Police presence on the road serves as a deterrent to would-be criminals. “We must continue to maintain high presence on our highways, particularly as we approach the Christmas period, we are pushing out more patrol vehicles to our highways…and these are customized patrol vehicles.”

He added that the emergency lines should be designed in such a way that the Ambulance Service, Fire Service, Police, and other emergency services like National Emergency Management Agency (NEMA) can all use them. He called on telecom regulatory bodies to come up with it.