Home News Feed Police Shield My husband’s Killer Because He Was A “Nobody” – Widow...
Facebook
Twitter
WhatsApp

Shogunle area of Ikeja, Lagos – Sympathisers still offer their condolences to the family of Azeez Omotosho, 38, who was shot last Saturday by a police Corporal attached to the Shogunle Police Division, Lagos. 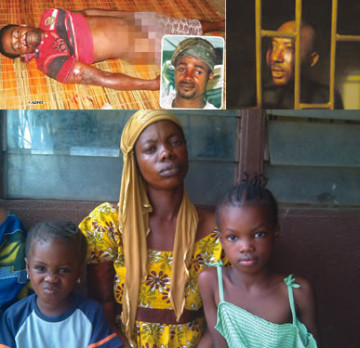 Sherifat, the deceased’s widow, mother of their three children, is still in shock over her husband’s death.

Mr. Omotosho was allegedly shot when he intervened in a disagrement between the policemen and his friend’s brother.

“The police authorities believe my husband is a ‘nobody’. This is why they think they can sweep this matter under the rug. If my husband is a son of someone ‘big’ in the society, heads would already be rolling right now,” the widow said.

“That policeman cut short my husband’s life. But this is not just about a life lost. This is about our children’s lives that have been changed forever. My sadness is not just for losing my husband. I lost our hardworking breadwinner.

“The police authorities who are probably trying their best to cover this up now are not thinking about the fact that the education of my children has been halted now because there is no way I can afford to send them to school for now.

“Their father was all I had. He told me that he would ensure that his children get all the education they want. He was particularly concerned about their education. He was willing to shoulder the responsibility of his children’s education to any stage required. God will judge them if they cover up the man that shot him.”

Before her husband’s death, Sherifat was a petty trader, but this is not enough to provide for the children.

Sherifat says one of their daughters ran and hid inside the house when she saw the Chairman of the Local Government Council as he paid the family a visit. The little girl is still afraid of the men in the uniform because she witnessed what one of them had done to her father.

“That child will never know his father,” the widow said of their youngest child, still a toddler. “How can someone kill the father of my three children and believe the matter will go away like that? Because they think we are not a rich family?”

She married Azeez eight years ago, and he had never been involved in any criminal activity, and any attempt by the police to label him as a troublemaker would mean they are heartless, she says.

The victim’s siblings also say the killers must face the consequences, as Azeez’s elder brother, Mustapha, claims that his brother was shot without provocation.

“When the Shogunle Divisional Police Officer came to visit in company with the chairman of the local government covering this area, what he said pointed to the fact that he was trying to cover the culprit.

“He said the policeman was beaten by thugs before he released the shot that killed my brother. That was a lie. We took a photograph of the policeman when he was put in a cell in the police station. There was no single injury on him.

“We showed the DPO the photographs, which had no evidence of him being beaten. He was shocked that we had such evidence. But he admitted that the policeman and his colleague at the scene were on an illegal assignment,” Mustapha says.

Ngozi Braide, a spokesperson to the police, said last Sunday that the local policemen went on a ‘stop and search’ mission to curb the unrest that was provoked by Azeez’s death.

She had said that some ‘hoodlums’ hit the suspect, identified as Gabriel, on the head with a bottle and tried to snatch his rifle. However, the family of the deceased said none of that happened.

Azeez’s murder is an addition to the statistics of killing of civilians that policemen in Lagos have allegedly perpetrated.

In January 2013, a police corporal shot a young man suspected to be a ‘tout’ for refusing to give him N500 at the Murtala Muhammed International Airport, Lagos.

Three months later, a trader was shot dead by policemen at Daleko Bus Stop on the Mushin-Isolo Expressway. Some policemen who fled on motorcycles thereafter were later arrested.

In August, 36-year-old Olalekan Azeez was shot dead by a policeman at Ladega area of Ikorodu, Lagos after he tried to prevent his motorcycle from being taken away by the Rapid Response Squad in the area.

In October, Rafiu Adeniji, was shot in the chest by a policeman at Mangoro on the Lagos-Abeokuta Expressway after he challenged them for causing an accident in which his vehicle was damaged. His six-year-old daughter was in the car when he was shot by a policeman who later fled with his colleagues.

A few hours after Adeniji’s death, Ganiyu Adedoyin was killed by policemen attached to the Makinde Division during a protest embarked upon by youth reacting to the crime.