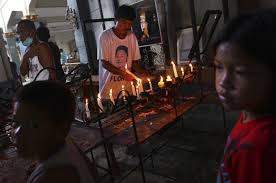 Survivors of Typhoon Haiyan have flocked to ruined churches, kneeling in prayer under torn roofs as the Philippines faces an enormous rebuilding task from the storm that killed at least 3,681 people and forced 4 million from their homes.

At Santo Nino Church, near the waterfront in the flattened city of Tacloban, birds flitted between the rafters overhead as women moved through the pews with collection plates on Sunday. At the end of mass, the Roman Catholic congregation broke into applause.

Capidos had been sheltering at home with nine other members of her family when Haiyan struck on November 8.

As the waters rose, she floated her three grandchildren on a slab of styrofoam through a road flooded with debris and shipping containers to a nearby Chinese temple. Her family survived.

“That’s why I’m crying,” she said. “I thank God I was given a second chance to live.”

Violeta Simbulan, 63, said the priest’s sermon promising that God would always be there offered her comfort while trying to cope with losing two cousins and an aunt in the disaster.

“We are being tested by God, to see how strong our faith is, to see if our faith is true,” priest, Amadero Alvero, said at another mass. “This is a test of God. He wants to know that we have faith in him in good times, as well as in bad.”

Meanwhile, a massive relief effort is finally kicking into gear, nine days after one of the most powerful typhoons on record wreaked havoc across the impoverished area in the central Philippines with monster winds and a deadly storm surge of sea water.

President Benigno Aquino said on Sunday that he would set up camp in the city of Tacloban to ensure that the distribution of relief supplies goes smoothly and power is restored after complaints from survivors that they have yet to receive proper help.

Aquino has been criticised for the slow pace of aid distribution and unclear estimates of casualties, especially in Tacloban, capital of hardest-hit Leyte province.

Philippine authorities and international aid agencies face a mounting humanitarian crisis, with the number of people displaced by the catastrophe estimated at 4 million, up from 900,000 late last week.

Nearly half a million houses were damaged by the storm, half of them destroyed, according to the United Nations.

While aid packages have begun to reach more remote areas, much of it carried by helicopters brought by the USS George Washington aircraft carrier, the UN said people were still going hungry in some mountainous provinces.

It said information about several provinces in the west of the Visayas region remained “limited”, with 60 percent of people in towns in the northeast part of Capiz province needing food support.

There are 1,186 people missing, according to the national count. The official death toll has only risen by 60 since Friday, giving hope that initial local estimates of 10,000 dead were overstated. [AlJazeera]