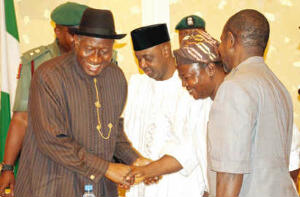 The widely anticipated meeting between President Goodluck Jonathan and the Academic Staff Union of Universities, ASUU, to find a way of resolving the four month old strike by university lecturers, held Monday in Abuja.

This is just as the union’s meeting with the Senate President David Mark ended without a progressive conclusion.

The ASUU delegation at the meeting which started around 2.30 pm was made up of the Chairman of ASUU, Dr Fagge and other members of the executive of the Union.

President Jonathan, his Vice, the secretary to the government of the federation, ministers of education and Labour were all present at the meeting.

The President of Nigerian Labour Congress, Mallam Abdulwaheed Omar was also in attendance.

Exchanging pleasantries with the ASUU delegation at the meeting, President Jonathan said, “I hope this strike will end today. Our children have suffered enough. We must find a solution”.

Earlier, at the end of their meeting, both ASUU and the Senate President did not agree to call off the strike after the union had presented its position before Senator Mark, although the union expressed optimism that the intervention of the Senate might bring a lasting solution to the crisis.

Speaking in an interview after a closed-door session with the Senate, ASUU President, Dr. Nasir Isa Fagge said the meeting was convened at the instance of the Senate and that after presenting their position, the union was waiting for the Senate’s reaction to their position.

When asked whether the closed door meeting was conclusive, Dr. Fagge whose answer was in the negative, however, said that the intervention by the Senate President was a welcome development to get the crisis sorted out for the universities to be re-opened and that the union was waiting for the outcome.

Senate President, David Mark said: “As you are aware, I have been mandated by the Senate to meet with you and the Federal Government to resolve this crisis as soon as possible so that the children will go back to the classrooms and I believe that is what you also want.

“So we are on the same wave length, just a matter of approach to get it right. I sympathise with your cause and I believe whatever can be done for you to go back to your work should be done and as quickly as possible.

“I think this is long overdue for us to sort out. So, the intervention as you may know, the Senate mandated me to talk to both ASUU and talk with Mr. President and that is precisely what am doing.

“At the end of the day, it is not how long we dragged this matter that is important but how soon we sort it out. We will sort it out so that there will be no winner, no loser.

ASUU President, Dr. Fagge said, “Members of ASUU are not just lecturers. We are also parents and also among us we have students who are pursuing post-graduate degrees so this strike directly affects us negatively.” [Vanguard]