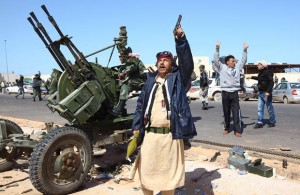 Rival armed groups battle across Tripoli for hours with anti-aircraft guns and grenades, killing at least one and wounding 12.

The clashes erupted after the leader of an armed group, Nuri Friwan, died from his wounds after he was shot on Tuesday at a checkpoint manned by fighters from Soug al-Jomaa, an eastern Tripoli district.

Dozens of armed men, some riding in pickup trucks mounted with anti-aircraft guns and others with rocket propelled grenades came from the western city of Misrata to avenge his death and attack a rival group in Tripoli, witnesses said.

Gunfire broke out while young people were enjoying a water pipe on the seafront and families were shopping or dining at the start of the weekend. Families had to scamper for safety following the gun battle.

The Radisson Blu, one of Tripoli’s best hotels, evacuated some frightened guests after windows in the reception area were smashed by stray gunfire, an employee said.

When Libyan leader Mouammar Gaddafi was overthrown and killed in October 2011, the rebels were hailed as heroes for bringing an end to more than four decades of his rule.

But since then, they have formed armed groups with different ideologies and motivations.

Many factions have rejected the government’s demands to turn in their weapons or join the national security forces, and a patchwork of armed groups effectively controls much of the country.