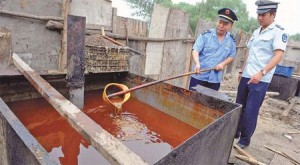 According to foodies, traditional cuisine is among the best things China has to offer. The Chinese food prepared and sold on the streets is not only delicious, but it’s also a big part of the cityscape. The problem is that some street vendors and even restaurants have taken recycling too far by using gutter oil – yes, gutter oil – as cooking oil. This practice  has nothing to do with being eco-friendly, but rather with the Chinese food black market, where gutter oil is presented as a cost-friendly solution for small businesses.

Why is it called “gutter oil”, you ask? Well, sadly enough, the name is not a metaphor, but it merely describes the source of the oil used illegally in the food market. The process of turning sewer sludge into cooking oil is quite simple and disgusting: after draining sewers, trash bins, gutters and anything that may contain cooking oil and animal parts, the content is boiled and then filtered. As expected, the final product is not only unhealthy (and gross!), but it can be fatal in some cases, as it contains carcinogens and other dangerous toxins. Recycling oil is not a novelty in the food industry, where cooking oil is re-used after refining  and purifying it, but in most cases the origin of the oil is clearly not the gutter.

Chinese authorities are well aware of this practice, which has been going on for years, and are making great efforts to put an end to it. Unfortunately, those involved in the gutter oil business are so numerous that even despite the constant news about the police catching and punishing them, new makers and vendors of gutter oil always seem to take their place. Even the possibility of spending life in prison doesn’t scare the members of these operations.

On the bright side, it seems that only 1/10th of the cooking oil in China is actually gutter oil, which means that the public shouldn’t be scared of eating out. Unfortunately, to some, the percentage is high enough to make them skeptical about Chinese food. Authorities are striving to put an end to this practice and prevent taking the reputation of Chinese cuisine into the gutter, but this is proving out to be very difficult since cooking oil isn’t an affordable commodity for everyone.