A human rights lawyer, Femi Falana, has alleged that officials of the Nigeria Police Force and the Department of State Security Service, SSS, were involved in the four months ‘detention’ of Enugu State’s First Lady, Clara Chime. 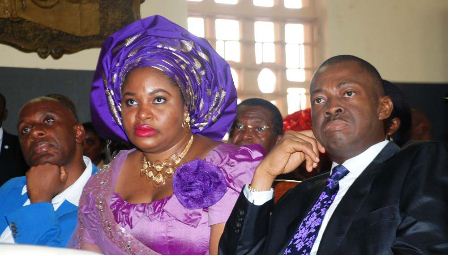 Mr. Falana made the allegation at the launching of the book, ‘Honour For Sale, An Insider Account of the Murder of Dele Giwa by Major Debo Bashorun’, in Lagos on Friday.

“I have discovered that the police and SSS helped the governor in confining his wife in a room for four months incommunicado,” Mr. Falana said.

Earlier this month, Mrs. Chime was reported to have sent a letter to Mr. Falana, claiming that she had been detained in the government house by her husband, Governor Sullivan Chime. This led the lawyer to write a petition to the Inspector General of Police, and the National Human Rights Commission seeking an investigation into the alleged abuse of Mrs. Chime’s right of free movement.

The Governor later held a press conference confirming that he had detained his wife but only because of her ill-health.

”The police officers were also at the press conference when the governor admitted that he has turned the government house into a psychiatric ward,” he lamented.

He stated that the connivance of the security operatives with the ruling class to oppress Nigerians was now the major threat to the nation’s democracy and rule of law. He enjoined all Nigerians to resist it.