Julius Adegun had on Saturday, September 21, 2013, boarded a commercial bus from Abule-Egba, on the Lagos-Abeokuta Expresssway, around 10.30pm. 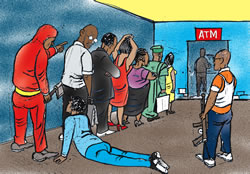 He was heading to Iyana-Ipaja but had no idea he had boarded the bus with a three-man gang of robbers. The events that unfolded later were to confound him because it was one he had never heard of.

“I had heard of robbers waylaying people after they had used the ATM before. I had even heard of people being ambushed immediately they were about to use the ATM and forced to withdraw certain amount of money by robbers. But I never imagined I would be a victim of this kind of robbery,” he said.

He told Saturday PUNCH there were already nine passengers in the 14-seater bus apart from the driver as at the time he boarded.

The bus had moved about 10 minutes when it got to a bank on the expressway towards Iyana Ipaja and the robbers promptly swung into action, he said.

“One of the robbers, who had posed as the conductor all along turned towards us and asked, ‘Hope you all have your ATM cards?’ He spoke in pidgin. Nobody seemed to be listening to him because we did not realise what was happening at first.

‘Then he said to the driver, ‘Alaye, enter that bank.’ That was when I started to connect the dots in my head. We started protesting, asking why they would be stopping in front of a bank at that time of the night.

“Clearly, the driver was a part of the gang. One of the robbers who had sat quietly at the back of the bus with one other passenger shouted at us. He said, ‘Shut up! Just cooperate peacefully and you will be on your way. He pointed a locally made pistol at us.”

Adegun said after the robbers had told them to bring out their ATM cards or risk being shot, some of them promptly did. But two passengers – a young man and a woman – who said they had no ATM card on them were slapped many times as they were being searched.

Eventually, five of them had ATM cards on them at the time.

“One of the robbers took us in turn to the ATM and asked us to put in our Personal Identification Numbers. They withdrew everything that each of us had in the account.

“I had N43,000 in my account. They first checked the account balance and withdrew N40,000. I was initially praying that the ATM would not work that day but unfortunately it did.

“The other victims too were robbed of almost all they had in each of their accounts. A young man with us actually said he was supposed to use the N80,000 in his account to buy tyres for his boss the following morning. But everything was withdrawn. He was the one they robbed of the highest amount.”

He said they could not raise the alarm because the robber with the gun threatened to shoot anyone that attempted to make any noise.

Asked if they reported to the police after the robbery, he said after the robbers took them into a street off the major road and asked them to disembark, he immediately called a police distress line he had on his phone.

“The details of the robbery, the number of victims, and the description of the vehicle were taken by the person who answered the call. The police promised to alert the patrol team in the area but I don’t know what happened after that,” he said.

Asked if he was able to get the vehicle’s number plate, he said it was too dark for him to be able to make out the number.

This method of using commercial buses seems to make it easier for the robbers to rob a higher number of people at once rather than staking out ATM terminals.