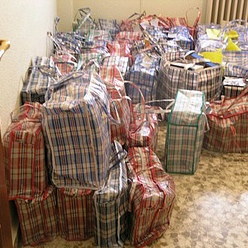 After trailing their victim to one of the commercial banks in Akure metropolis at about 2pm and concluding a well orchestrated robbery, facts have emerged that robbers snatched Ghana-must-go bags containing vouchers in Akure, the Ondo State capital, mistaking it for cash.

Bank sources had informed Vanguard after the incident which caused robbery scare, making banks in the state capital to hurriedly close shop, that the robbers had snatched the bags supposedly containing huge sums of money from a customer who had gone to withdraw cash from the bank.

Ondo State Police Public Relations Officer, Wole Ogodo, who confirmed the incident said the affected bank had informed the police that what was snatched were processed bank vouchers, and not cash.

“On November 6, 2013 at about 1800hrs, Oke Oludare, the Operational Manager of the Ecobank, reported at the station formally that some hoodlums numbering about three trailed their vehicle and double crossed it at the front of the bank.

“They forcefully removed three Ghana-must- go bags containing processed vouchers thinking it was money and zoomed off through NEPA roundabout.”

Assuring that the robbers would soon be arrested and brought to justice, Ogodo said they would have since discovered that their efforts had come to nothing since only papers were contained in the bags.