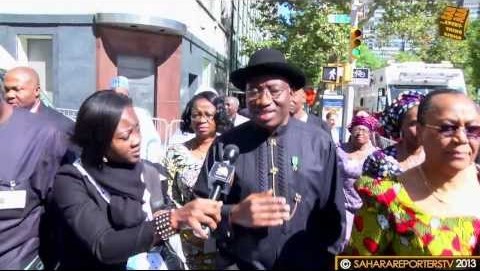 The management of online news portal, SaharaReporters has drawn the battle line with the Presidency over the latter’s threat to sue for libel and willful defamation of the character and reputation of President Goodluck Jonathan, saying it is ready to defend its recent publications anywhere, even in a court of law.

Sahara Reporters had reported that Mr. Jonathan took ill as a result of a heavy binge at his birthday gig in London where he had too much of a locally brewed gin known as ‘ogogoro’, but the Special Adviser on Media and Publicity to the President, Dr. Reuben Abati, described the report as irresponsible and false.

In a terse statement issued by Abati on Friday, the Presidency said, “As unregulated as they are, SaharaReporters and their ilk are not beyond the bounds of legal action for libel and willful defamation of the character and reputation of a President who has courageously stepped forward to serve his country,” the statement threatened.

“They know very well that they can never substantiate or prove the constant false allegations and innuendoes they publish for the sole purpose of negatively portraying President Jonathan and his administration.

“Their incessant claim of a bibulous President is pure fiction and blackmail, and the product of malicious imagination. We warn that our forbearance of their disrespectful caricaturing of the President is not limitless.”

However, in its response articulated in a statement on Saturday, Sahara Reporters said, “Despite Mr. Jonathan’s threats and deployment of scare tactics, SaharaReporters stands by its account of the events in London in the past few days.

“While we have the attention of the president and the hawks in the presidency, we take this opportunity to draw their attention to the scandalous quality of Nigerian governance that SaharaReporters and most of the Nigerian media have been reporting for many years, of which his government forms only a part.

“As the 2015 election approaches and Mr. Jonathan tries to invite the sympathy of Nigerians in his favor, we challenge him to prove— including in a court of law—that these reports have been “entirely fictional, malicious, hate-driven and scurrilous distortion of the facts”.