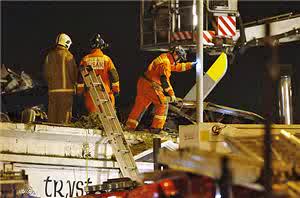 Several people have been injured as a police helicopter crashed into the roof of a pub in the Scottish city of Glasgow, according to lawmakers and witnesses.

Firefighters, paramedics and police rushed to the Clutha pub on Friday after the accident, which happened while the pub was full of revellers celebrating the start of the St Andrew’s Day weekend.

Scotland’s First Minister Alex Salmond said that people should prepare for the likelihood of fatalities.

“Given an incident of this scale we must all prepare ourselves for the likelihood of fatalities,” Salmond said, adding that a full rescue operation was under way.

Jim Murphy, a Labour party member of parliament and opposition spokesman for international development, told the BBC he was driving through the area “just a few seconds after what seems like a helicopter has crashed into a pub”.

“It’s a well established Glasgow pub. It’s a horrible horrible scene, but well done to the folk who were here. Everyone formed a chain of people from inside the pub to outside, and the fire brigade and everyone were here very quickly.”

Several pictures on social networks showed what appeared to be the wreckage of a dark-coloured helicopter with yellow police markings.

Part of the helicopter had apparently crashed through the roof of the one-storey pub.

A spokesman for the Police Roll of Honour Trust, a charity that keeps a record of officers killed in the line of duty, told AFP they believed it was a police helicopter but could not confirm.

The trust also tweeted: “Our thoughts are with the crew of @policescotland SP99 helicopter that has crashed in Glasgow – hoping everyone is alright”.

British Prime Minister David Cameron said: “My thoughts are with everyone affected by the helicopter crash in Glasgow – and the emergency services working tonight.”

“Absolutely awful news about a helicopter crashing into the Clutha. All my thoughts are with everyone involved & the emergency services,” she tweeted. [AlJazeera]