A wedding party in Yemen turned into a bloodbath when a guest dancing to Gangnam Style shot dead at least three people after apparently losing control of his AK-47.

Horrific video of the incident was uploaded to YouTube showing a group of guests performing the moves to the hit song by South Korean pop star Psy.

Among them is one man waving his assault rifle as he spins round on the dance floor while others look on.

When the song reaches its chorus, shots can be heard as the gunman sprays bullets all around him.

One of the victims can be seen on the ground in a pool of blood after suffering a head wound.

Another man writhes in agony as guests drag the bodies away, while the screams of terrified witnesses fill the night air.

Although it is illegal in many parts of Yemen to carry weapons during weddings, gunfire during such celebrations is common practice

The video could not be independently verified. It is also not known if the gunman was arrested after the incident.

Maybe it is another warning ‘From the Above’ for the Yemen government to stop forced marriages of child brides – girls as young as NINE.

Check out photos and the video below. WARNING: Viewer Discretion Is Advised. 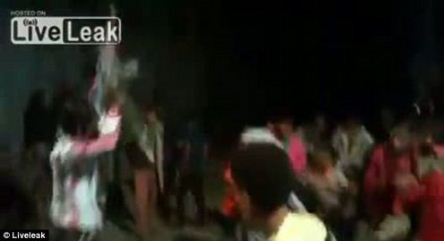