The Islamic religion hammers on freewill offering to the needy, which is known as Zakat, and all Muslims recognise the fact that they owe the underprivileged the duty to give, in cash or kind, to better their lot. 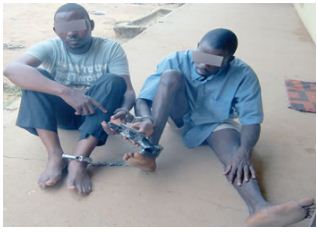 In this obligation, there is no force or compulsion, but a sense of duty.

But how does one explain the decision of Alhaji Farouk Badmus, whose mission as a Muslim is to send armed men to notable Muslims to rob them at gunpoint, giving his reason as wanting ‘to take from the rich to give to the poor’? T

his was what Badmus and his errand boy, Yinus Adewale, a 29-year-old Iwo town, Osun State-born graduate of Electrical/Electronics Engineering from Federal Polytechnic, Offa, Kwara State,  decided to do , and which has landed the two suspects in police net.

The Oyo State Commissioner of Police, Mohammed Indabawa, had told journalists during a parade of suspects at the police headquarters, Eleyele, Ibadan, on Tuesday, November 19, that Adewale attacked one Alhaji (names withheld) on Friday, November 15, 2013 at about 2:30 pm., in his house at Moniya area of the town, while armed with European-made Baretta pistol, loaded with five rounds of live ammunition.

According to the police commissioner, the man summoned courage and confronted his assailant. “With the help of neighbours, the suspected armed robber was overpowered and disarmed,” he said, adding that a call was put through to Moniya Division, from where the Divisional Police Officer sent policemen to arrest the suspect.

When the suspect was transferred to the Special Anti-Robbery Squad (SARS), Ibadan, for further interrogation, Crime Reports learnt that his confession led to the arrest of Badmus, whom he claimed sent him on the criminal mission.

In an interview with the suspect, who claimed that he just completed his National Youth Service Corps (NYSC) in February in Taraba State, he narrated his involvement thus: “I was sent to rob our target by one Alhaji Farouk Badmus, whom I met inside a commercial bus while going back to Iwo town, during my visit to Ibadan to claim my last state allowance. Since then, Alhaji Badmus had been of assistance to me and always gave me words of advice.

“It was during one of my visits to him that he told me about a former missionary of NASFAT, a Muslim organisation, against whom he held a grudge. He told me that he sought the help of the Islamic missionary in 2010, when his wife needed N80,000 to carry out an operation when she was pregnant, but the man said he had no money to help.

“Sadly, Alhaji Badmus said his wife lost the baby, because he did not get the money he needed for the operation. He was angry with the missionary for not helping when he knew he had the means to do so.

“Alhaji Badmus also added that there were other wealthy Muslims he knew but who are not ready to help the underprivileged. He suggested that we should target those wealthy but stingy Muslims, rob them and give a part of our loot to the needy while we keep the rest for ourselves. I agreed with him but suggested that we should get a gun to make our job easier.

“I told him that I would approach one guy called Topless in Otukpo, Benue State, to see if he could help in procuring a gun. Alhaji gave me N40,000 and I added N10,000 to purchase the gun. Topless said the gun was N70,000 and he is still expecting me to pay a balance of N20,000. When I came back, we agreed that we would not be assassins or armed robbers, deciding that we would just be using the gun to scare our targets.

“When I came back from Benue State, Alhaji Badmus gave me the missionary’s number and I called him, pretending that I needed prayers for my brother whose goods were seized. The man described his house to me and asked me to bring my brother. When I got to him, I said my brother was already in a nearby hotel, but he told me that he does not go to people’s houses to pray for them, asking me to tell my brother to come to his house.

“When I saw he was hesitant in going with me, I decided to take out the weapon with me which was inside a polythene bag, in order to scare him, but the victim was quick to notice it. He immediately started dragging the bag with me and shouted for help. I dropped the gun and ran but I was pursued and caught by the people in the area. They wounded me and handed me over to the police.”

Thirty-six-year-old Badmus, an indigene of Ijebu-Ode in Ogun State, but who resides in Iwo, confessed to have sent the suspect to rob the victim. He also revealed how the thought was conceived. “We were in the house one fateful day, when I thought of people who have money, but do not want to give to the poor; I later made up my mind to take from those types of people to give to the poor.”

Mr Indabawa said that the two suspects were still aiding the police in their investigations, adding that they would be charged to court at the completion of investigation.