I cannot tell you how I contracted HIV, but I had a brief fling with a pupil in my secondary school in 2009 when I was 17. 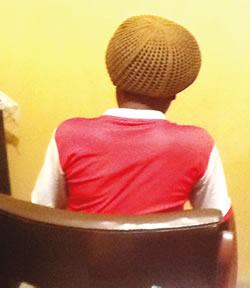 “The brief sexual relationship got me pregnant. When I checked my HIV status during my ante-natal registration, I was confirmed positive.”

Those were the words of Mrs. Grace Brume, 22-year-old HIV patient, expecting her second baby at the Amassoma General Hospital, Amassoma, Bayelsa State.

Grace is one of the HIV patients that are undergoing a special programme at the AGH christened, ‘Prevention of Mother to Child Transmission’.

The PMCT, an initiative of the National Agency for the Control of AIDS and other collaborating organisations, is meant to reduce the viral loads so that the transmission of mother-to-child is prevented.

Grace’s husband, Fyneface, has assumed the foster father of Grace’s first baby, PraiseGod, whose biological father, had since disappeared.

Our correspondent was on the entourage of NACA and the Bayelsa State Agency for the Control of AIDS which visited select general hospitals in the state, including AGH.

At AGH, our correspondent met Grace, who had hidden her HIV positive status from family members, including her husband, four years after.

PUNCH Metro had enquired from Grace how her husband, Fyneface, was treating her considering her challenge, she said, “I did not tell him that I am HIV positive. No one knows that I am HIV-positive except an aunt. Even my husband does not know. I have hidden my status from him since I tested positive.

“I would have told my husband, but the aunt said I should not. My aunt keeps encouraging me that those who have HIV will not die and that there are drugs they take to keep alive. Interestingly, my husband is negative.”

Grace said each time she and her husband wanted to have sex, she usually convinced him (Fyneface) to use condoms.

“My husband used to kick against it each time I gave him condoms to use. I told him I was asthmatic and I did not want to get pregnant often. As a result, he agreed to be using condoms even though he did not like it.

“When we wanted to have the second baby, he did it without condoms. Still, my husband is negative.”

She said her resolve not to tell anybody was because of stigmatization which most HIV patients usually suffer.

Grace said her first child born to the “rascally schoolboy” was HIV-negative. She said Praise-God was in the Kindergarten class in a private school, stressing that when she was tested after 18 months of birth, there was no single trace of HIV in her (Praise-God).

She commended NACA, SACA and other organisations for helping to ensure that HIV patients have respite in the country.

Grace said, “My advice for pregnant women is for them to go to hospital to their HIV status. If they are positive, they should start taking their drugs to avoid the baby being infected.

“The ART drugs are working very well. I almost committed suicide five years ago when I tested positive to HIV. I was told that I was pregnant and had HIV. It was as if the entire world was crashing on my head. I went to tell my aunt about the development. She advised that I hid the result from everybody so that I would not have psychological problems.”

The ART Focal Person at AGH, Dr. Yomi Ibiye-Constance, said with the PMCT, it was possible for a HIV-positive mother to give birth to a HIV-negative child. He said the hospital had recorded 20 of such cases.

Yomi said, “We commence pregnant mother on HIV drugs as early as possible and this drug has been known to effectively reduce the viral loads and so the transmission of mother to child is taken care of with the drugs.

Head, Corporate Communications, NACA, Mr. Shola Idris, said the visits to the hospitals were part of the agency’s measures to check the success of PMCT/ART.