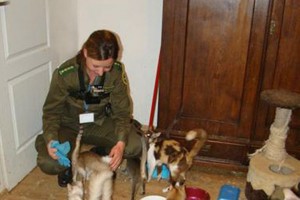 A sick scientist trying to create Frankenstein cats and dogs in horrific experiments on live and dead animals has been arrested.

Almost 100 animal corpses, some showing signs of dissection, were found in freezers at the woman’s home.

Police raided the house after locals complained about the smell and noise coming from it.

The police said: “She’d grown obsessed with creating a new breed of dog – and then when that failed she switched to cats.

“There had obviously been some sort of sick experiments going on. She’ll now be banned from keeping animals.

“But till we get the autopsies on the bodies and examine the injuries to the live cats we won’t know exactly what she was doing here.”

The dead animals are being examined by specialist vets to determine exactly how they died at the house in Warsaw, Poland.

The woman faces up to two years in prison for animal cruelty if she is convicted of using the cats and dogs for illegal experiments.

Welfare officers had to make several trips to remove the surviving cats and take them to a Warsaw shelter.