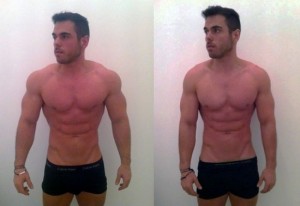 Ross Edgeley may become everyone’s new best friend after he recently demonstrated that gaining weight doesn’t have everything to do with fat. The 28-year-old sport scientist and writer did an experiment to prove that “your nutrition and self esteem shouldn’t be governed by the weighing scales if you’re on a diet. So many people are slaves to the scales and have their self-esteem and nutrition governed by them. I hope this experiment will create a healthier relationship between people and the weighing scales and people will realize weight can fluctuate based on many factors, not just fat”.

The scientist’s extreme experiment had him trying to lose 14 kilograms in no more than 24 hours. Keep in mind that this was a dangerous experiment that was done under the doctors’ strict supervision, so DO NOT TRY THIS AT HOME. Edgeley’s main goal was that of losing as much water as possible. “As much as 50 per cent to 70 per cent of our body weight is made up of water. So weighing 95kg that means in theory 47.5kg of my body is water weight. Cutting too much water could be fatal since it’s needed for your vital organs to function and even maintain a healthy blood volume, but cutting a lot of water from the body through sweat suits, diuretics and not drinking any that day would dramatically reduce my weight”, he explains. To force the water out of his system, he began his 24-hour experiment by taking a very hot bath with Epsom salt baths. He drank a bit of water spiced with diuretics (vitamin C, dandelion root, caffeine), he didn’t include carbs nor salt in his diet (salt is known to retain water), he took saunas and went to the gym. By doing that, he managed to lose the 12 kilograms and feel a little light-headed as a result. Since the lost weight was just water, he put it back in just a couple of hours after he had reached his target.

Although the method is dangerous and unpleasant, Edgeley succeeded in proving his point that “weighing yourself is an inaccurate measure of body fat and self-esteem”. Here are a few excerpts from the diary he held during those 24 hours:

I wake up and consult the pages of notes I’ve been compiling from thousands of medical journals over the last few months in preparation. The first note reads: ‘As much as 50 per cent – 70 per cent of our body weight is made up of the water content in your bodies.’ This means your level of hydration can also have a dramatic effect on how much you weight. So put simply, if you were to sweat a lot in the gym or perhaps forget your water bottle, don’t be surprised if you are two or three pounds lighter after the session. It won’t have anything to do with your body fat percentage, but the number on the scales may look better. But with over 24lb to lose I know I needed to incorporate something a little more drastic than forgetting my water bottle to the gym.

Instead I begin my day with one ridiculously hot Epsom salt bath coupled with a 100ml bottle of water laced with diuretics.This is the only liquid I am allowed all day. This is all because the body sweats most under hot, humid conditions and there aren’t many things more hot and humid than being cooked like a giant lobster in a bath tub. Plus the ‘poisoned chalice’ that was my diuretic-ridden water bottle would also make sure my body didn’t store and hold the tiny amount of water I was allowed for the day – over the course of the day I would go to the loo 20 times.

I drag my weary body to the gym and put it on a treadmill for 45 minutes, while all the time resisting the lure of the water fountain. To make things worse, I was also wearing four layers of clothes with black bin bags sellotaped to my arms, legs and body to increase the amount I sweat. Usually I quite enjoy the gym but those 45 minutes were some of the worst I ever spent down there.

I won’t lie, this time was all pretty boring and consisted of more baths, more ‘baby food’ and me trying to force down a steak with absolutely no seasoning on.

Me and my stomach have fallen out because of the water famine and I could only manage two mouthfuls of steak and a few lettuce leaves.

I visit the gym for one last time. Looking gaunt I actually feel surprisingly perky since I just took 150mg of caffeine to help get my body over the final hurdle, plus caffeine is a diuretic itself. The effects soon wore off though and this time I was only able to manage 30 minutes on the treadmill before my feet would literally not leave the floor and I had to hit the big red emergency stop button. Dragging myself to the changing room I then slowly got undressed and entered the sauna to lose the final six pounds.

Standing on the scales for one last time I nervously await the scales decision as it flickers and calculates my number. 13st, I’ve done it! Over 24 pounds lost in less than 24 hours! Wasting no time finding my underwear I ran to my bag and necked a pre-made four litre bottle of water with diluted multi vitamins and electrolytes, much to the amazement of full changing room who had no idea of the last 24 hours I’ve endured.