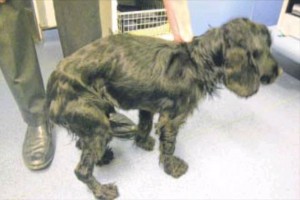 A dog ate umbrella parts after it was starved by its owners, a court heard.

They then refused to pay for surgery to remove the pieces from “emaciated” cocker spaniel Paddy’s stomach.

They were hauled before court after being charged with causing unnecessary suffering to the dog and failing to get vet treatment.

Andrew Wiles, prosecuting, told the court how Mrs Pugsly took Paddy to a vet after it ate the brolly and was told it would cost up to £1,000 to operate on the dog to remove the item from his stomach.

She took the dog away, but the vets called the RSPCA as they were concerned about the dog.

When inspectors arrived at the home they found Paddy unable to stand and ‘on the verge of dying’.

Inspectors called police after the couple started getting abusive and they were arrested and Paddy removed.

Vet Bruce McLeary said that without intervention, the dog would have “died a slow and painful death”.

He said: “The dog was so hungry, it’s no surprise that it chose to eat an umbrella.”

Paddy has now been successfully re-homed and is fit and well.