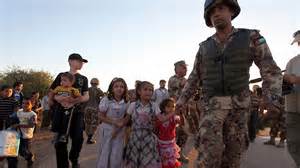 Syrian refugee children are paying a cruel price as civil war rips their country apart, the United Nations warns in a report with heart-rending testimony from youngsters driven from their homes.

“This is impossible to forget. It’s like someone has stabbed me with a knife when I remember,” 15-year-old Taha, who saw seven corpses near his house in Syria, told interviewers with the UN refugee agency (UNHCR).

He and scores of other Syrian refugee children in Jordan and Lebanon were interviewed for a 60-page UNHCR report, starkly laying out the trauma of young exiles from a conflict that has killed more than 120,000 people.

The children’s last names were not revealed, to protect them and their families.

“It is important that this human face of the refugee crisis is not forgotten,” Volker Turk, UNHCR head of international protection, told journalists in Geneva on Friday.

“And if you look at what children face, they illustrate very strongly what this crisis is all about,” he said.

Children make up about half of the more than 2.2 million Syrians who have fled their homeland, according to UN numbers of registered refugees.

“Looking back over the last 20 years, the Syria refugee crisis for us is unparalleled since the Rwanda crisis,” Turk said, referring to the 1994 genocide in the African nation.

He pointed out that children also represent about half of the 6.5 million people driven from their homes but who remain inside Syria.

In the report, the children describe in words and with drawings the horrors they have witnessed and the turmoil within.

“There is blood up to people’s knees in Syria,” said 17-year-old Sala.

Some of the children also drew pictures of weapons of war and bodies.

“The idea of home and warmth is gone with a stroke,” said Turk.

“There is a lot of psychological scarring and a lot of trauma … You see it in sleeplessness, children being very withdrawn, there is stuttering, bed-wetting.”

“Anger was also common, with some boys wanting to return to Syria to fight,” according to the report.

Other scars are physical: 741 Syrian children were treated for war wounds in Lebanon in the first six months of this year, and 1000 cared for in the vast Za’atari refugee camp in Jordan.