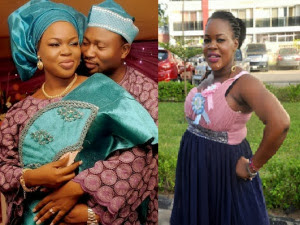 Nollywood actress Taiwo Aromokun who recently delivered a set of twins in London, UK might just be in a serious financial trouble. The actress got into this mess when she married an alleged Londoner last year but later found out the man lied to her. Apparently the man doesn’t have a legal stay in the United Kingdom, so he can’t stay in London.

Following her baby delivery in London, Taiwo Aromokun has battled many challenges including her inability to pay her 3 bedroom apartment rent in Lagos.  According to industry sources, the Egba-born actress is presently stranded in London with financial problem which didn’t permit her to return back to Nigeria with her twins.
To prevent eviction from her apartment in Lagos, the actress sent people to plead with her Landlord but the baba in question refused to listen. As we speak, the landlord has given the actress one month ultimatum to pay all her outstanding rent or he will forcefully evict her from the house. In the face of all these challenges, her husband is no where to be found.