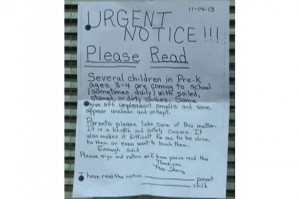 A New York pre-school teacher has sent a letter to parents complaining about children being dirty and smelly.

The note from the pre-school teacher at the ‘BUILD Academy’ in the Buffalo district read: “Several children aged 3-4 are coming to school (sometimes daily) with soiled, stained, or dirty clothes. Some give off unpleasant smells and some appear unclean and unkept.

“It is a health and safety concern. It also makes it difficult for me to be close to them or even want to touch them. Enough said.”

Furious parents have countered that the unnamed teacher should show more compassion in a community where almost 30% of the population live below the poverty line.

Kimberly Wells said: “The first thing my granddaughter asked me was, “Does my teacher think I stink? I told her, “No, you don’t”.

“She’s teaching the kids how to segregate other kids. You’re showing how to outnumber another child. That’s not right. That’s not what we’re in school for.

“I did try to talk to the teacher about this and she didn’t want to hear anything I had to say.”

The teacher’s note, which was sent without the head teacher’s permission, also asks parents for signatures.

However, the school has decided not to punish the teacher.