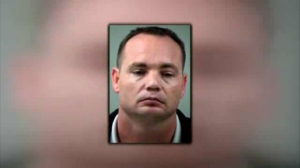 Here’s yet another shocking example of what could be considered “police brutality,” but is also another case of pervasive violence against women in our society.

An on-duty San Antonio police officer was arrested on Saturday morning after he allegedly pulled over a 19-year-old woman and raped her.

Officer Jackie Neal, 40, was slapped with a felony assault charge and released on $20,000 bond.

Neal, an 11-year veteran of the force, told the woman her car was reported stolen. She showed him a sales slip for the recently purchased car, but he made her get out of the vehicle so he could pat her down. The driver demanded a female officer for the pat down but her request was ignored.

Neal proceeded to grope the woman during the pat down, put her into handcuffs, and then forced her into the back of his car where, according to the woman, he raped her. He instructed her after to keep it a secret though she reported it later that day.

The assault was not caught on tape because Neal’s SAPD squad car camera did not have a functioning hard drive at the time. And according to Police Chief William McManus, the non-functioning camera is something Neal would have been aware of, probably leading him to commit the crime in the car.

And here’s another disturbing tidbit about Neal. This is the third time he’s been accused of sexual misconduct.

Just a few years ago, a woman made similar claims against Neal, but she later refused to cooperate in an investigation. In September, he was suspended for three days for dating an 18-year-old member of the Police Explorer program. But instead of being fired from the force, he was transferred to the night shift.

This time, Neal did catch some real heat, but pending an indictment, he’ll continue to be paid by the SAPD.