Ghanaian actress, Nadia Buari’s mother, Hajia Buari has cursed Nollywood playboy Jim Iyke for leading her daughter on, making her believe he would settle down with her and then breaking her heart. 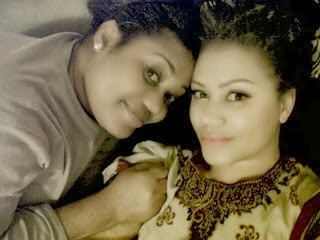 Jim and Nadia have been posting romantic photos of them together and the couple appeared to be so in love until recently when Jim took to his twitter handle to announce that he had no plans of getting married soon and Nadia responded by deleting all their lovey-dovey photos on her instagram account.

After the break-up news hit social media, Hajia according to a Ghanaian entertainment site said the couple were great together.

“They were great together. They were like a couple and we thought they were heading for the altar. She was very connected to him.”

“She has talked to me about getting married and having children. She plans on settling down but not right now. She has to focus on her career.

She went further to release curses on Jim Iyke saying he will suffer untold hardship.

Angry Hajia Buari was quoted as saying, “That Nigerian boy will suffer for daring to break my baby’s heart.”

Do you think Jim and Nadia will make up?