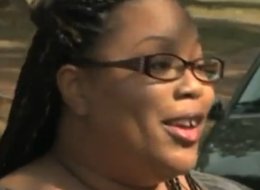 A woman’s potty mouth led to her being charged an extra $150 from a towing company that removed her car from an illegal parking spot.

Mahogony Grandison was visiting a friend in Huntsville, Ala., and parked in an illegal spot. She and others were towed away, but when it came time to settle up, she was charged $350 while the others were only billed $200, KFSN-TV reported.

Daniel Bradford, owner of Affordable Towing, blamed the extra $150 charge on Grandison’s language and behavior, which he said crossed a line.

“She was threatening, cussing, saying she was going to do this and do that,” he said, the Los Angeles Times reported. “Well, with all the harassment we had, we had to do something.”

Grandison insists she never did what the towing service claims.

“I explained multiple times it was not me. I even apologized for the person who did curse them out. They were not hearing it,” Grandison said, according to OKCFox.com.

But Affordable Towing employees disagree and gave WHNT-TV a copy of the report filed with the Huntsville Police Dept. when Grandison came to pick up her car. The report mentions a verbal argument between on-duty employees and Grandison.

As rude as Grandison allegedly was, Bradford is willing to let bygones be bygones.

“I talked to my wife and other drivers. We could, if she wants to make an agreement to come and apologize about what she did. We’ll agree to give her money back, or at least some of it,” he told WHNT-TV.