Nigeria’s football family was thrown into mourning on November 19, 2013, Tuesday, as news on the death of the former Golden Eaglets defender, Friday Njengo, spread. 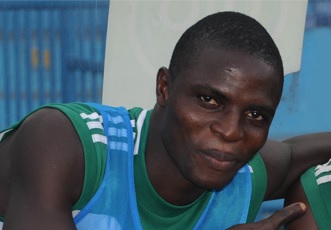 He had been in intensive care at the National Hospital, Abuja, for more than nine months after sustaining injuries in a ghastly road accident.
Late Friday Njengo, a regular with the Manu Garba team during the qualifying series for the 2013 CAN U-17 Championship, during which the Eaglets thrashed Niger Republic, Guinea and Mali home-and-away, was involved in an accident with team-mate Adamu Abubakar while traveling from Jalingo to Calabar for the team’s first phase of final camping for the African Championship. The accident occurred on February 3, 2013.

“This is very sad news. We had looked forward to the boy eventually recovering to be part of the team again, as the squad progresses to the next level. It is a thing of sorrow to lose such a huge talent this way,” NFF general secretary Musa Amadu, said on Tuesday.

While Njengo sustained a head injury in the accident, goalkeeper Abubakar was luckier and was discharged after a few days.
NFF president, Alhaji Aminu Maigari, who was at the Africa Cup of Nations in South Africa, had ordered that Njengo be moved from the Federal Medical Centre, Jalingo to the National Hospital two days after the crash.
At the National Hospital, an operation was performed on the player and he was thought to be recovering, though still suffering from memory lapses, until his death on Sunday night.
The NFF also confirmed that burial arrangements would be announced after consultations with the family.
Source: National Telegraph