Fifty people have died after a Boeing 737 crashed while attempting to land at the international airport of Kazan, the capital of the republic of Tatarstan, 500 miles east of Moscow in Russia. 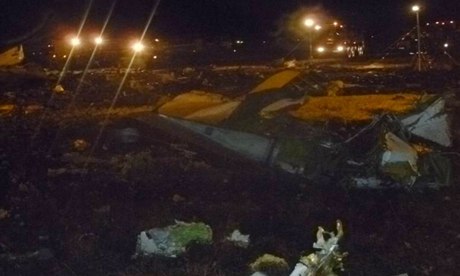 The plane belonged to the local Tatarstan Airlines. There were 44 passengers and six crew on board, among them the son of Tatarstan’s president and a top local security official.

One Briton was among the dead, the Foreign Office confirmed. It said it was providing consular assistance to those affected.

Witnesses at the airport heard a loud explosion when the plane hit the runway at 7.20pm local time, an hour after taking off from Moscow. The cause of the crash was not immediately known, but authorities speculated that pilot error or technical failure were the most likely explanations. Leftover fuel in the tanks is believed to have sparked the explosion.

According to witnesses, the pilots aborted the first landing attempt, and when the plane descended a second time, it crashed and caught fire. The pilots reportedly informed the tower that the plane was not ready for landing when it was 500 metres (1,640ft) from the runway.

Lenara Kashafutdinova, a journalist who said she had flown on the same aircraft from Kazan to Domodedovo airport in Moscow earlier in the day, told Channel One state television that the landing in Moscow had been frightening because of a strong vibration during the final minutes of the flight.

While there had been snowfall at the airport, Russian airlines are used to operating in wintry conditions, and the authorities described weather conditions at the time of the crash as “normal”. The airport was closed for landings immediately after the incident.

“When we were landing, it was not clear whether there was a strong wind – although in Moscow the weather was fine – or some kind of technical trouble,” said Kashafutdinova. “We were blown in different directions, the plane was tossed around. The man sitting next to me was white as a sheet.”

As emergency services worked at the scene of the disaster on Sunday evening, relatives of the victims gathered at the airport. The authorities published a list of casualties within hours of the crash.

Irek Minnikhanov, the son of the Tatarstan president, Rustam Minnikhanov, was listed among the dead, along with Aleksandr Antonov, the chief of the local directorate of the FSB, Russia’s main security body.

The accident is the worst in the history of the Tatarstan airline, which is owned by the republic’s government. It is believed that the plane was 23 years old.

The last fatal crash was in December, when a Russian-made Tupolev belonging to Red Wings airline careered off the runway at Vnukovo airport in Moscow, rolled across a snowy field and slammed into the slope of a nearby road, breaking into pieces and catching fire. Investigators say equipment failure caused the crash, which killed five people.

A 2011 crash in Yaroslavl that killed 44 people including a professional hockey team was blamed on pilot error. And Russian investigators found that the pilots involved in two crashes that killed 10 and 47 people in recent years were intoxicated.