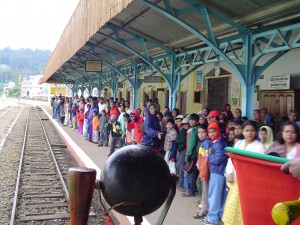 Eight people have been killed when a train ran over them in southern India.

M Kiran Kumar, the top elected official of Andhra Pradesh state, said the victims were crossing the tracks on foot when they were hit by the train on Saturday.

Initial reports said the victims had gotten off another train that they stopped by pulling the emergency chain, fearing a fire in their coach.

Kumar said that as their train came to a halt, they jumped onto the adjacent track and were struck by a train coming from the opposite direction.

The accident happened in Vijainagaram district, about 800 kilometres northeast of Hyderabad, the state capital.

Railway accidents are common in India, which has one of the world’s largest networks and serves more than 18.5 million passengers a day.